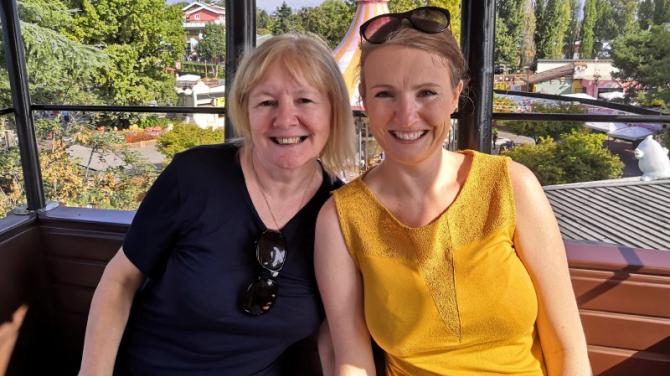 Anna Beretta, 35, witnessed her mum Virginia call her GP up to 40 times in a day trying to get a GP appointment during the pandemic, which also delayed vital tests.

Tragically, by the time Virginia was diagnosed the disease had spread Anna is now supporting the charity’s ‘Unite-Diagnose-Save-Lives’ campaign to fund more early diagnosis research and give doctors the tools they need to diagnose more people in time for lifesaving treatment.

Only 30 per cent of GPs have sufficient access ‘all of the time’ to vital scans needed to diagnose the deadliest common cancer - according to new polling for Pancreatic Cancer UK released today (Wednesday 8 June). No screening programmes or early detection tests exist for pancreatic cancer, meaning CT scans are currently the only tools available to help doctors diagnose the disease in time to save lives.

The poll of 1,004 UK GPs conducted by Savanta ComRes on behalf of the charity revealed worryingly inconsistent access to scans: 36 per cent of GPs said they had sufficient access ‘some of the time’, while, alarmingly, 20 per cent were either ‘rarely’ or ‘never’ able to refer someone they suspected of having pancreatic cancer within the 28-day diagnostic standard.

Anna’s mum, Virginia had experienced back pain for years and had begun feeling fatigued, but she put this down to keeping busy with her family and young grandchildren.

In December 2020 she started feeling sick and died just six months later, three weeks past her 62nd birthday, having never received any treatment.

Anna said: “I sat with her until she insisted that she got speaking with a GP, who said they would order blood tests but that her blood would not be taken until two weeks or so. Mum didn't last the two weeks. She passed a black stool and I advised her to get to A&E, and that's when the ball started to roll. They performed scans in the local hospital which revealed a four-centimetre mass on the head of her pancreas. The diagnosis was not officially confirmed until February, because they had to wait on a biopsy. December and January were a wasted opportunity to diagnose my mother and to refer her to oncology.”

“We knew that this cancer was the deadliest but in January no one had stressed to us the urgency required for this type of aggressive cancer. If we had known what we know now, we would have been pushing the hospital constantly to obtain an urgent referral to oncology.”

Tragically, 80 per cent of people with pancreatic cancer are already not being diagnosed until after the disease has spread – almost double the proportion for other cancers. Nearly three quarters of GPs (72 per cent) are concerned that the current COVID-19 cancer diagnostic backlog may continue to prevent people with pancreatic cancer from being diagnosed in time for potentially lifesaving treatment, surgery to remove their tumour.

Anna said: “I think the urgency is important; once someone is diagnosed with pancreatic cancer, they should see an oncologist, that day. I know that, in reality, that might not happen because of resources, but there shouldn't be a two to four-week wait.”

“Other cancers, such as breast cancer, have seen improved survival rates and yet pancreatic cancer has seen no change in survival for over 50 years. Diagnosis must be made earlier to save lives and education is needed across the board on this cancer so health care professionals know what symptoms to look out for while there is no simple diagnostic test available.”

The major cause of late diagnosis is pancreatic cancer’s vague symptoms - such as back pain, indigestion and unexpected weight-loss – because these are also common to many less serious health conditions. With no early detections tools to help them, it is very difficult for GPs to identify who should be urgently referred for scans to confirm or rule out the disease. Nearly half of all pancreatic cancer patients are currently diagnosed via an emergency (such as through visiting A&E (1). The impact is hugely significant: one-year survival for patients diagnosed through a GP referral is three times higher(2).

Pancreatic Cancer UK is urging the public to help fund the development of the first-ever simple test for the disease and help save thousands more lives each year through its ‘Unite-Diagnose-Save-Lives’ campaign. It has already invested £1.6M into the Pancreatic Cancer UK Early Diagnosis Research Alliance an innovative project involving more than 40 leading UK scientists, which has already created a blood test that’s proven to be highly accurate in laboratory trials. However, the charity needs public support to fund the next phase of the research. Despite causing a death of a similar number of people annually as breast cancer (3), pancreatic cancer receives 93% less research funding. Decades of underinvestment mean that today more than half of people with pancreatic cancer still die within three months of diagnosis, appalling odds of survival that have barely improved since the 1970s.

Diana Jupp, CEO of Pancreatic Cancer UK, said: “Sorry, it’s too late. We can’t save you” are the devastating words that 80% of people diagnosed with pancreatic cancer will hear this year, the same words the majority of patients and their loved ones have been hearing for the last 50 years. We have hardly made any progress.

“We simply cannot allow this to continue, not when we have seen the game-changing impact early diagnosis research has had for breast, prostate and other common cancers. We have to give doctors the innovative new tools they need to detect the warning signs earlier, so they can ensure those who need it, receive treatment as soon as possible.

“It’s an enormous challenge, but if the public stand with us, they can help deliver the first diagnostic test for the deadliest common cancer - a historic breakthrough that could save thousands of lives a year.”

Pancreatic Cancer UK are urging the public to pledge their support for more research into early diagnosis at: https://www.pancreaticcancer.org.uk/unite-diagnose-save-lives/