Decades of success on the cards for NMD District 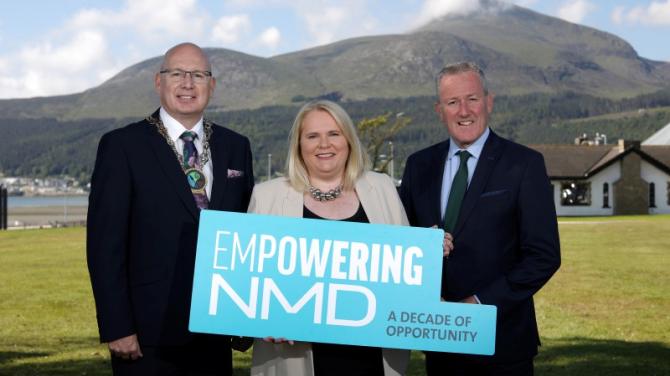 The twin benefits of a transformative city deal combined with its strategic location on the Dublin to Belfast economic corridor leave the Newry, Mourne and Down (NMD) District poised for future decades of global economic growth.

That was the message delivered at an event attended by public and private sector stakeholders in Newcastle, County Down, today which heard that the impressive growth posted across NMD since 2002 has provided the “foundations which will form the basis for a prosperous future for all”.

Empowering NMD revealed how the Belfast Region City Deal will supercharge innovation and develop and fine tune the skills base across Newry, Mourne and Down, acting as a catalyst for sustained economic growth and helping create thousands of new and better jobs.

Held in the Slieve Donard Hotel, the event also discussed how NMD will be able to leverage international recognition and investment through its key role as secretariate of the Dublin Belfast Economic Corridor (DBEC).

Empowering NMD was designed to communicate and highlight the council’s bold vision for the next 20 years, one which garners support from stakeholders throughout the district and across the island, North and South, and builds on the social and economic progress made since 2002.

Chair of Newry, Mourne and Down District Council Michael Savage said: “We are privileged to have been gifted a district which has been primed for success. The leaders who advocated for Newry to be designated a city 20 years ago paved the way for these far-reaching initiatives and put us in prime position to take advantage of global opportunities.

“It is incumbent on all of us to make every effort to ensure these once-in-a-lifetime initiatives to allow this District to reach its full potential, to flourish and further its attraction as a place to live, work and visit. Funding levers such as the Belfast Region City Deal will be used to develop the skills base across Newry, Mourne and Down to meet the needs of industry; they will help to attract R&D funding to keep our companies at the cutting edge; they will develop our infrastructure at critical junctures to smooth the movement of people, goods and tourists; and they will help us to open up the natural beauty of this region to an eager and growing tourist economy. We stand quite literally at the foothills of our tourism opportunity.

He added: “Most critically, we must make the most of our strategic position midway between Belfast and Dublin, one which allows us to take advantage of the economic might of the collective regions along the corridor as well the unique position the region finds itself in in the wake of Brexit. Through collaboration between the private, public and third sectors, we can ensure an incredibly exciting future for all and cement an even more prosperous future for the next generation.”

Finance Minister, Conor Murphy said: “This £200 million investment shows how collaboration between Government, local councils and industry can be transformative and bring greater prosperity and opportunities for local people. The inclusion of social value criteria in contracts for projects delivered under the City and Growth Deals will benefit everyone in the local community, helping to address regional imbalance. This investment will create jobs, enhance tourism and build on the strong economic foundations developed in the Newry, Mourne and Down District.”

Dundrum-born Patrick Kielty also addressed the audience, relating his love for the District and his confidence in its future success.

The event also heard about the wide range of investment opportunities available across Newry city and the wider District; the strong pipeline of well-educated talent and an education sector which flexes to meet the needs of business; the thriving and vibrant start-up and early-stage community; the unique sense of entrepreneurial spirit and drive; the range of successful large indigenous and inward investor companies which call NMD home and the opportunities for young people to stay or move to NMD to build a successful, well rewarding career.