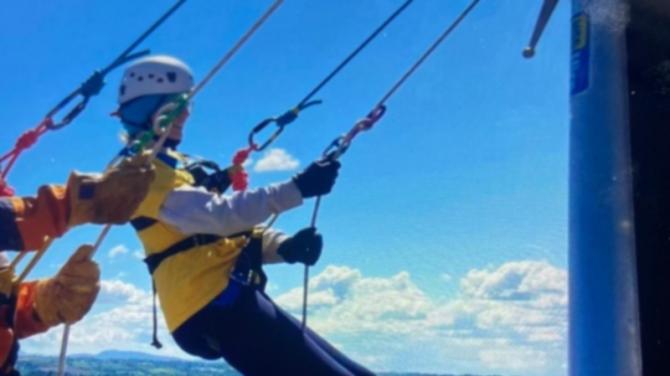 PAIGE Morgan, a Rostrevor woman with nerves of steel, has successfully abseiled down Belfast City hospital to raise funds for the charity Friends of the Cancer Centre.

Paige, who was inspired to undertake the hair-raising activity as a means of expressing her gratitude for the exemplary level of support that was delivered by the charity to her late grandfather Eamon Cooper, abseiled down the edifice of the city hospital alongside seventy other companions, raising over £1100 in the process.

The experience of abseiling down the city hospital to raise funds for Friends of the Cancer Centre has left such an indelible influence on Paige, that she claims she “cannot wait to do it again”

“Abseiling down Belfast City Hospital was brilliant; it was really good experience. I can't wait to do it again. The day was beautiful with a clear blue sky and the atmosphere was amazing and the view was spectacular, I could see right down as far as Belfast City Castle. I loved every second of it. I didn't want the experience to end.

“There were around seventy other people who abseiled down Belfast city Hospital with me although I didn't know any of them. Like I said I can't wait to do it again. I do know there is another abseiling event scheduled to take place at the Europa Hotel, but the Europa is nowhere near as tall as the city hospital, so it would be no good to me as I need to get somewhere really, really high.

“I know my Grandad would be proud of me, this was a brilliant way to honour his memory. It was hard going back down, but at the same time it was rewarding knowing what I was doing was going towards helping a good cause and hopefully helping a lot of people.”

“My own father was diagnosed with cancer back in Easter and I had signed up to do this in memory of my grandfather so it was hard. However, in having done this hopefully I am going to help some people out including my own Dad.”

Paige elaborated on how she believes the money raised by both her and her fellow altruistic adrenaline aficionados will play its part in helping Friends of the Cancer Centre care for those unfortunate enough to befall the tragic fate of having received a positive Cancer diagnosis.

The Cancer Centre recently purchased a rowing machine for haematology patients to help them whenever they have lost muscle. The money that I have raised will hopefully help friends of the Cancer Centre to purchase more useful equipment like this.