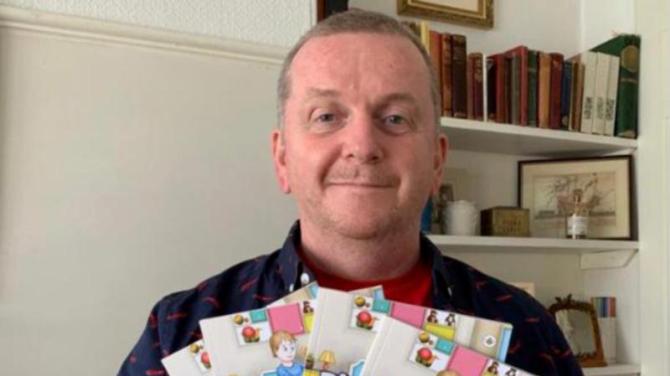 According to Austin the book, which written as a dedication to his beloved two-year old granddaughter Edith, tells the story of “a bored child on a typical wet Wednesday afternoon, moping outside and wondering what it is he is going to do with his afternoon.”

“The book is called "Dinner with Teddy" and it is dedicated to my granddaughter Edith. She is nearly two years old. Dinner with Teddy is an illustrated children's book aimed at pre-school or nursery aged children.

“Dinner with Teddy tells the story of a bored child on a typical wet Wednesday afternoon, moping outside and wondering what it is he is going to do with his afternoon. He then realises that I know what I will play with my Teddy bear. The book details all the different things that this child and the Teddy bear do on this Rainy wet Wednesday afternoon. Teddy is an astronaut, Teddy is this, Teddy is that, Teddy is the other. The book is written in child friendly rhythms

“The following is an excerpt from the book “Sitting in the corner, sitting alone outside no one to phone, what should I do until my dinner is ready, all I can do is play with my Teddy. Teddy the soldier, Teddy the clown, Teddy goes up, Teddy comes down.”

“The book goes on like this and the end of the book concludes with the line "what is that I hear, a voice from downstairs dinner is ready for children and bears, I love when I hear that dinner is ready, it is the best time of the day for me and my teddy.”

Although Austin, who is originally from Killeavy road in Newry but now resides in Plymouth England, claims that he was writing for his own children all their lives to keep “them happy and amused” apparently he believed now was the right time to get his stories published as opposed to in the eighties and nineties when , in his own opinion if you wanted to publish a book if you wanted to publish a book “you would be waiting, and waiting and waiting.”

“I am originally from Killeavy road in the Meadow in Newry. I went to Saint Patricks primary school. I left home in 1986 and went to Lancashire and I ended up in Exeter where I got married and we moved to Plymouth a number of years ago. I am currently working in Derriford hospital.

“I was writing for my own children who are now grown up and my daughter May suggested about a year ago about emailing any publishers who want to publish the work of new authors. So, we sent out a couple of different stories to about six different publishers and two publishers wanted me to publish two different books.

“Also, my own granddaughter Edith inspired me to get this book published because I have been writing for my own children all their lives. I have always liked writing and the only way I can explain it is that in the same way that some musicians can catch a note and they make a little tune, I can hear a couple words and if they catch my attention I can turn this into a story or a rhythm, but I have always written to keep my kids happy and amused so I have produced quite a lot of different stories and poems for my own children when they were growing up.

“So, in a way now is the best time I could have gotten these books published because it is a fast-paced industry now. The best part about publishing the book is that the publishers have to send a copy to the British Library. So this means that in one hundred years' time I will still have a book in the British library, along with Wordsworth and Shakespeare and all those people.”

“In addition to "Dinner with Teddy" I have got another book with another publisher coming out next year called Mabel Bean. I have a second book written and have a publisher lined up who wants to publish it but I don't want it to be published until Dinner with Teddy is ran it course, so it will probably be about another year before it is published.

“The book is about my daughter Mays dog. I am currently with a publisher called Olympia publishers at the moment and they have guided me through the process of having "Dinner with Teddy" published. I praise them for their help because this is a new experience. The illustrations that they have produced for the book have been absolutely fantastic.

“Dinner with Teddy is available in a lot of different outlets such as Waterstones, WHS smith, Amazon and it has even been published in Holland and Denmark.”