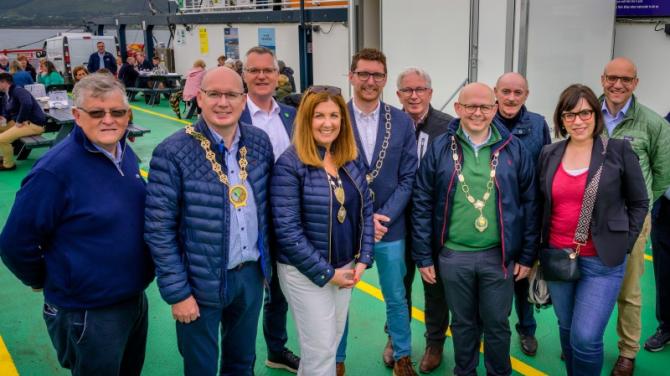 Over 170 representatives from six cross border business groups have come together to connect on an evening cruise on Carlingford Lough.

The event was a collaboration between Newry, Dundalk, Drogheda, Kilkeel, Newry and Warrenpoint, Burren and Rostrevor Chambers of Commerce and the South Armagh Business Improvement Group. The event was made possible by sponsorship from Louth County Council.

Julie Gibbons, President, Newry Chamber, commented “We were delighted to be involved in this special night. We have a long history of working in partnership with Dundalk Chamber. Over the last three years, our jointly organised annual Cross Border Trade Conference has been held virtually, so we were keen to get back face-to-face.”

As part of her address on the night, Julie commented on the recent announcement by the British Government on the NI protocol by stating “I am sure that none of you miss the irony of partnering on this event with our close neighbours and friends literally in the middle of Carlingford Lough, where somewhere below us is the border that once again is the subject of such controversy and debate.

Almost all of the membership of Newry Chamber of Commerce & Trade are in favour of free and open trade, in whatever guise this takes, with the majority favouring the NI protocol as a mechanism to ensure that there is no hard border to inhibit north/south trade and to optimise east/west trade also.

As the business voice in the Greater Newry area with over 300 members, we have been lobbying hard on our members’ behalf to express this view, North, South, with the EU and in London at UK government cabinet level. So we are disappointed with this week’s Westminster announcement and what this might mean for Cross Border trade and the broader issues of political instability and a continued lack of certainty or clarity.

Particularly when we have so much potential to exploit, especially in this strategic location on the Dublin Belfast Economic corridor with some real traction being made by the eight signatory councils.

But on the ground, where it counts, I think if we look around at the businesses attending the cruise and the incredible partnerships we have forged, we are testament to the fact that regardless of the politics, all we want to do is progress, trade with each other and raise our communities’ standard of living.”