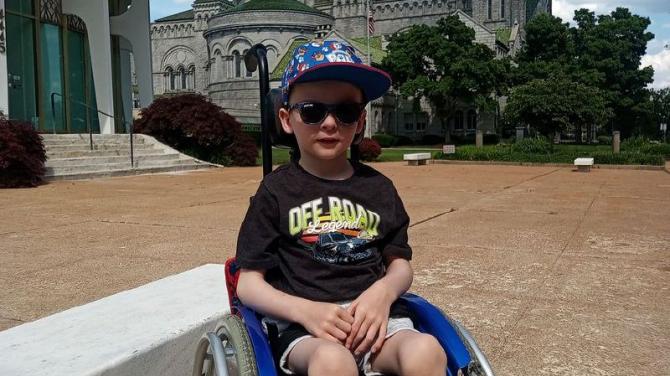 Aaron, who was born with Cerebral palsy and Diplegia in his limbs which would see him waking up in the middle of the night screaming in intense pain , underwent the surgery at Saint Louis Children’s Hospital in Missouri.

The procedure involves the cutting of nerve rootlets in the spinal canal so that he can now hopefully live a life that is relatively pain free.

The surgery was made a reality thanks to the efforts of the charity group established by Aaron’s parents Patrick and Lisa “Aaron's mission to walk” which over the course of eight months successfully fundraised the money needed to send Aaron to the states to receive the surgery he so desperately needed to help the young boy be rid of the pain his condition causes him.

Patrick claims that the efforts taken to help his son travel to America has in his own words “opened his eyes to see how good people really are.”

“ We would not be here if it was not for each and every person that donated, organized events, gave up their time to smash our 100k target. There is no way we can thank people enough; we have had support locally and all around the island of Ireland and even donations as far away as the US. What this fundraiser has done to me personally has opened my eyes to see how good people really are.

“After these 8 months of meeting complete strangers not knowing Aaron or our family but giving up their time and money to help send a wee lad from Crossmaglen to the US is amazing.” .

Following the success of Aarons surgery his father Patrick expressed his gratitude to all those who have helped his son reach this milestone stating that he believes “ we would not be here if it was not for each and every person who donated.”

“We would not be here if it was not for each and every person that donated, organized events, gave up their time to smash our 100k target. There is no way we can thank people enough

“The first few days we got our Facebook page set up along with the charity just4children which handles our funds. We were nervous about trying to raise the massive amount of money and we formed a local committee to help us out. My wife and I were apprehensive about reaching the target considering all events were being cancelled and we couldn't organize large gatherings but the committee were confident we'd get there.

“When we set out on this mission our goal was to relieve Aaron of the pain he gets at night time, therefore giving him a chance to walk aided or unaided. The pain he had, I can only describe it as a muscle spasm the one I'm sure you would of had some time in bed yourself where your leg cramps up. He would regularly wake up at night screaming in pain and we could only comfort him and give him a muscle relaxer. We were so happy to get him a pain free life where he can get a night's sleep”

The form of surgery that Aaron underwent in America is known as Selective Dorsal Rhizotomy, or SDR surgery. It is a form of surgery being pioneered by experts in the field such as Dr T.S Park (pictured with Aaron on the right) who practices medicine at Saint Louis Children’s hospital in Missouri, which is where Aaron received his treatment.

The treatment is designed to help alleviate the symptoms often suffered by those who have Cerebral palsy such as the intense muscle spasms that Aarons father Patrick related his son would often suffer from, resulting in Aaron awakening screaming in the middle of the night due to the pain that these muscle contractions can inflict on a child as young as he is.

The surgery helps counteract these symptoms by aiming to reduce spasticity which is the result of an abnormal communication between the brain and the nerves in muscle tissue. SDR treats spasticity by cutting the nerve rootlets in the spinal canal that are sending abnormal signals to the muscles.

Having to undergo this treatment at any age would be quite the challenge, let alone for someone as young as Aaron. However despite this Patrick commends his son for being what he calls a “brave little man through it all.”

“I think the surgery has affected my wife Lisa and I more than Aaron. He has been a brave little man through it all, God love him. He always believed that his surgery would be the key to him walking and becoming a firefighter. He often said before surgery "when I have my operation and fix my legs I can join the fire brigade". I know in my heart it may never be possible for Aaron to become a firefighter with his condition but we will work hard to give him the best chance in the world, keeping his dream alive.”

Patrick states that watching his son undergo surgery has affected both he and his wife physically and emotionally, however the physical end which involved “sitting at his bed side after the operations was very easy compared to the emotional aspect” of the whole ordeal.

“The physical end was sitting at his bed side after the operations which was very easy compared to the emotional aspect. Watching him in pain after surgery and how brave he is, hoping some day he will understand why we went for this surgery. Like every parent we will do our best for our children with no regards to our own well being wishing we could trade place with him.

“We don't know how Aaron will turn out after all his surgery, will he walk? We won't know but we know he will be pain free and his life as a teenager growing into an adult will be extremely better since he has had the surgery. Having read studies of patients that had SDR surgery and listened to previous parents we know we have done the best for Aaron.”

In addition to expressing his gratitude to each and every person that contributed to help see that Aaron could travel to the United States to undergo this life changing procedure, Patrick also delivered a heartfelt thanks to Dr T.S Park and all his team for administering this groundbreaking procedure to his son which will make a great deal of difference in the years to come.

“I have no words big enough in my vocabulary to thank Dr Park for creating the SDR surgery. The man has been blessed with great hands and mind. He is approaching his five thousand SDR operation soon and we are very grateful he completed Aaron before he retires. He has a great team with him and I'm sure he will train his assistant to continue his great work.

“It's our first time in the US and I have to say the people of St Louis have been great. There were a lot of strangers greeting us in the street and the hospital staff were fantastic. The traveling to the US was a great experience and the airlines were mostly helpful, the only drama we had was they lost Aarons wheel chair in Chicago and literally stopped the plane to load it up.”

Patrick concluded by once again reiterating his thanks to all those that have helped his son on his long and arduous journey to receive treatment for his condition in the United States, claiming that the words “ thank you” do not even come close to expressing his families level of gratitude.

“I would like to sign off by saying thank you so much to everyone. It seems not near enough but my family will never be the same again as you all have touched our hearts in a way the words thank you don't come close to expressing.”