Foxgloves and fairies at Newry's Greenway 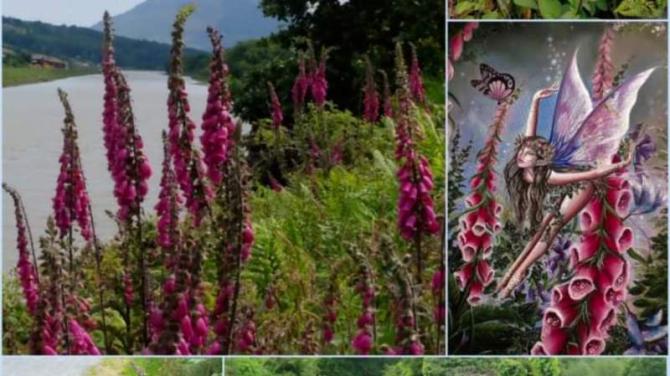 Coming from a poor single parent working class family from Mourneview Park, Newry my late father done his best rearing five of us and what we lacked in riches we inherited a wealth in oral history often touching upon folklore and superstition.

During the early days of Mourneview Park we had a Travelling family living in our estate who were the best of neighbours and they had family also living at the Middle Bank later to become known as St Christopher's Park.

Around small fires at the green in our estate we would often exchange or just listen to stories about ghosts, banshees and fairies, the Travellers being a very superstitions and god fearing lot.

I recall Paddy telling us about his people living at the Middle Bank having a great apprehension of venturing further South from their camp along what is now known as the Greenway.

He claimed that this was a sacred place where the fairies lived and to trespass through their land would bring a curse upon the individual and family.

Paddy went on to describe viewing at dusk from a safe distance at the Middle Bank the countless spires of foxgloves at the overgrown Greenway and what he claimed were fairies at work and play.

Recently on another Walk along the Greenway I noticed the riot of Foxgloves on both sides of the pathway smiling and thinking about the old tale Paddy had told me many years ago.

I photographed some of the Foxgloves and it inspired me to look up the background of these flowers and they certainly do have an associated with fairies I have attached my findings:

'There have been many suggestions for the derivation of the name “foxglove”. It is an ancient name and exists in a list of plants as old as the time of Edward III (King of England from 1327-1377).

The prefix 'fox' has most likely been commuted over time from “folks”, who to our fourteenth century ancestors were the fairies, but so-called as to speak of them explicitly was believed to get their attention and cause them to do mischief.

'Glove‘ may have come from the Anglo-Saxon 'gliew', which was the name for a musical instrument consisting of many small bells. So, put the two together and you could make it ‘Fairy Bells’. However it came about, Foxglove is the common name we all know and love it by.

There appear to be two Welsh names for the Foxglove, one is Ffion, from which the popular Welsh female name is taken and the other Maneg Ellyllyn which translate as “The Good People’s Glove.” Similar then to Folk’s Glove and its association with fairies.

Another name, Dead Man’s Bells served to warn of the plant’s poisonous disposition.

One story has it that fairies would hide themselves inside the foxgloves. Mischievous children, wanting to hear fairy thunder, would hold one of the flower bell then strike the other end on their hand. The poor fairy, rightly upset and probably rather cross, would make a snapping sound, a clap of fairy thunder, while she escaped from her retreat.

Foxglove is a plant beloved by the fairies, and its appearance in the wild indicates their presence. Likewise, fairies can be attracted to a domestic garden by planting foxgloves.

Dew collected from the blossoms is used in spells for communicating with fairies, though gloves must be worn when handling the plant as digitalis can be toxic.

In the Scottish borders, foxgloves leaves were strewn about babies' cradles for protection from bewitchement, while in Shropshire they were put in children's shoes for the same reason (and also as a cure for Scarlet Fever).

Picking foxglove flowers is said to be unlucky in Devon and Cornwall, this is because it robs the fairies, elves, and piskies of a plant they particularly delight in; in the north of England, foxglove flowers in the house are said to allow the Devil entrance.

In Roman times, foxglove was a flower sacred to the goddess Flora, who touched Hera on her breasts and belly with foxglove in order to impregnate her with the god Mars.

The plant has been associated with midwifery and women's magic ever since - as well as with "white witches" (practitioners of benign and healing magic) who live in the wild with vixen familiars, the latter pictured with enchanted foxglove bells around their necks.

In medieval gardens, the plant was believed to be sacred to the Virgin Mary. In the earliest recordings of the Language of Flowers, foxgloves symbolised riddles, conundrums, and secrets, but by the Victorian era they had devolved into the more negative symbol of insincerity.

A lovely old legend told in the West Country explains why foxgloves bob and sway even when there is no wind: this is the plant bowing to the fairy folk as they pass by.

The spires of foxgloves growing along Newry Greenway mark it out as a place beloved by fairies, a strip of land filled with riddles, secrets, and mystery so enjoy your next walk along the Greenway and tread carefully...