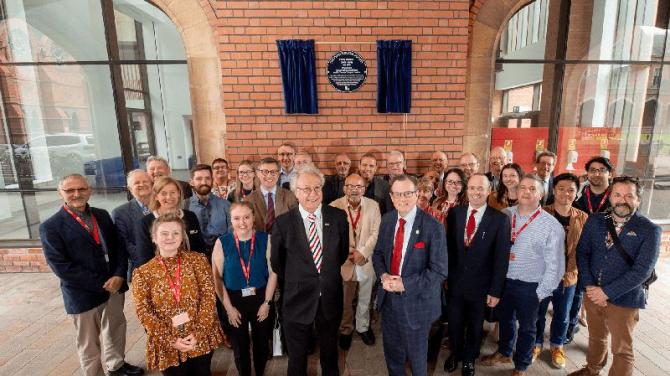 Barcroft is renowned for his work on the circulatory system. His meticulous research on blood flow determined how nerves and hormones control blood flow in the limbs.

The plaque is positioned at the Lanyon Building Quadrangle at Queen’s University Belfast, where Barcroft was appointed the Dunville Chair of Physiology. In this role, he transformed the physiology department through determination and his gifted abilities as a teacher, inspiring many young researchers into physiology and encouraging researchers to work at the institute.

Barcroft developed a new form of the stromuhr to measure the rate of blood flow at frequent intervals. An upgrade on the devices available at the time which could only take an average reading over a long period of time. Barcroft used this to study the regulation of blood flow in the limbs and to characterise fluctuations.

He used himself, healthy volunteers and willing patients as participants to better understand human physiology. He worked with Otto Edholm to devise a non-invasive method, known as “venous occlusion plethysmography”, to measure blood flow in the limbs. The work determined the active roles of the nerve fibres in constricting and dilating the blood vessels, which was vital to the study and treatment of high blood pressure.

“It gives me great pleasure to honour such a distinguished physiologist who contributed so much to both Queen’s University Belfast and the discipline of physiology. Barcroft’s infectious enthusiasm and curiosity brought out the best in all who knew him, and his work on blood circulation has left a lasting scientific impact.”

“We are honoured to be in Belfast to unveil this plaque in his memory. This is the tenth unveiling in The Physiological Society’s Blue Plaque scheme which is intended to raise the visibility of physiology and give the wider public an insight into the positive role that ‘the science of life’ plays in their everyday lives. We hope that these plaques will spark curiosity and help inspire new generations to get involved in the physiological sciences.”

During the year, The Physiological Society will be unveiling blue plaques at institutions across the UK and Ireland, celebrating and recognising institutions where distinguished physiologists who have made significant contributions to the discipline.

The plaques provide long-term recognition of the impact these scientists and their science has had, and by extension these plaques provide a marker of excellence for the universities that they adorn.