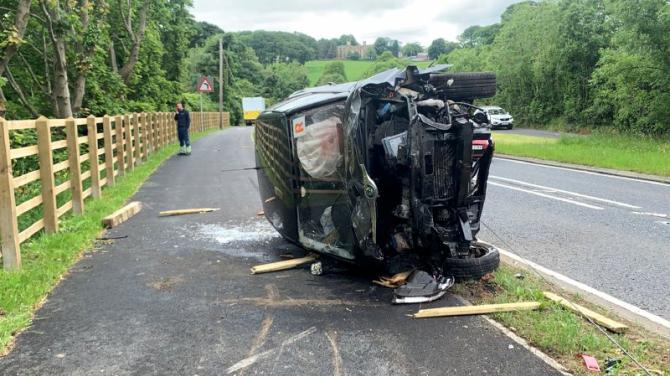 COURAGE shown by councillor Alan Lewis following a harrowing accident on the Dundrum Road Camlough has resulted in the life of a young driver being potentially saved.

The Slieve Croob councillor witnessed the accident in question, which invovled a car hitting the curb and spinning out before landing on its side, unfold before his very eyes whilst he was out for his daily run along the Dundrum road.

Mr Lewis related how he bravely approached the vehicle before emergency services arrived on scene to rescue the young lady trapped within it, showing absolutely no regard for his own personal safety in the process, with his task being made even more urgent when he observed that “smoke was bellowing out of the engine” and there was “a strong distinct smell of fuel” in the area.

“I was out for a run around lunch time. I would go in-between constituent business and work commitments. I was just running up to the crash site and I stopped to change songs on my phone because I didn't like the song I was currently listening to.

“I had run on and the car had just come right in front of where I was. The car hit the curb and it spun around twice and it flipped over and connected with the fence and the tree and then landed on its roof. I could see that the driver in the car was calling out for help and there was smoke bellowing out of the engine and there was a strong distinct smell of fuel. I could see the fuel starting to form a pool around the bottom of the car. I looked at the engine and it was then that I realised that I couldn't leave the driver there until emergency services arrived on the scene.

“I first tried to access the vehicle by climbing up on top of the vehicle and opening the side door but it was that badly damaged that it wouldn't open. I then considered trying to break the front window, but the front window was reinforced with anti-smash glass so I couldn't break it. Therefore, I used part of the broken fence to smash the back window and help the driver out.

“All I remember is using the pole to break the back window, reaching into the car and then helping the driver out. You don't think through what happens until after it happens.

“The driver was in a state of shock. Her work colleagues were quickly on the scene as the driver of the vehicle in question works in a local business. Passers-by were also able to get in touch with her parents.”

Following his admirable rescue of the young driver of the vehicle councillor Lewis speculated on what he believes could have happened if he hadn’t stopped to change the song playing on his phone whilst he was running , and giving thanks that things “worked out the way that they did.”

“If I hadn't stopped to change that song when I did I would have been exactly where the car hit. We need to thank the lord that things worked out the way that they did. All I can say of anyone else who would find themselves in this situation is that their instinct would have kicked in and that their main concern would have been the welfare of the driver.”