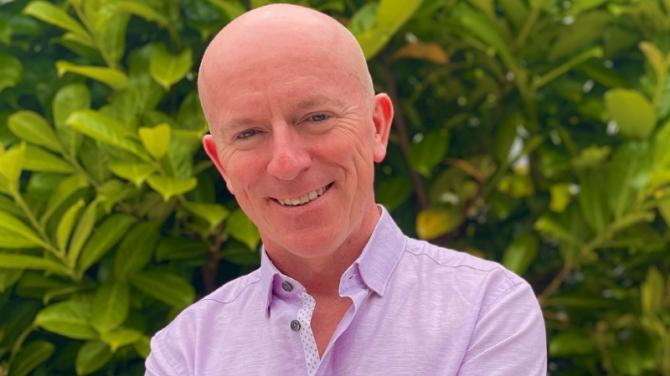 CONTINUED FROM PAGE ONE

KEVIN’S love for films grew throughout his life and even now his friends and family would joke that dinner time at the Fitzpatrick’s feels more like a Mark Kermode and Simon Mayo film review show.

In his 40’s Kevin filled his free time training for triathlons, a sport he loved. Although, when he was training it was not just adrenaline-pumping music filling his eardrums, but also audiobooks and podcasts on screenwriting.

“My writing phase coincided with the latter years of my triathlon phase. For about ten years I had been participating in long-distance Ironman events which sucked up any free time I had. When I finally hung up the Lycra, I focussed my free time on writing. It was a lot more rewarding and a lot easier on the joints.”

“I got into screenwriting quite by chance. I had come across an article in a Sunday newspaper about an on-line community set up to help unproduced screenwriters get started. As I had liked writing when I was younger, and I loved movies, what had I got to lose? I wrote a few scripts, sent then off. They were pretty crap to be honest, but I found I loved the process of making up stories and imagining them playing out on the big screen.”

Then in 2015 Northern Ireland Screen, the film funding agency, had an open call for new writers and Kevin submitted his screenplay, The Last Rifleman.

“I really didn’t expect to hear anything but several months later I got the call. They really liked the script and wanted to help me develop it. Within a year production company, Wee Buns Films from Belfast had optioned the rights to it and it was all systems go.”

Kevin has always loved the sweeping, epic movies from his childhood years, but also enjoys small, personal stories, that involve real-life people with real-life dramas. This is where the idea for The Last Rifleman came from. The film is inspired by the true story of a World War II veteran Bernard Jordan, who in 2014 broke out of his care home in England and returned to France for the 70th anniversary of the D-Day landings.

“The story immediately caught my imagination - an aging veteran returning to Normandy to confront the ghosts of his past - and I started working on a fictional version of it but set here, in Northern Ireland.”

The film will tell the touching tale of Artie Crawford who, at 92 years old, secretly flees his care home in Northern Ireland on the 75th anniversary of the D-Day landings in Normandy. He then sets out on a strenuous journey to France in the hope of paying his final respects to his best friend killed in battle. Along the way Artie is aided and abetted by the interesting and entertaining individuals he meets, each of them roused by Artie’s ambitious quest and his stubborn refusal to give up.

The shooting of The Last Rifleman kicked off last week in Northern Ireland and there will be a few familiar famous faces gracing the movie screen:

“What I learned about small, independent filmmakers is that they like to punch above their weight when it comes to casting. Mickey-Bo And Me director, Terry Loane came on board and immediately started looking for a lead actor to play our returning veteran, Artie. To say I was surprised when Pierce Brosnan signed up would be an understatement. But after six years of development his attachment finally got the project over the line with financiers.”

There is a really good cast in addition to Pierce. An Officer And A Gentleman’s, Louis Gossett Jnr plays a returning American GI while veteran German actor, Jurgen Prochnow plays an SS officer. And being a lover of film music, Kevin is thrilled that Oscar-winning film composer, Stephen Warbeck will be scoring the soundtrack.

The film is being Directed by Terry Loane produced by Wee Buns Films and co-produced with Ripple World Pictures. Without the support and funding provide by Northern Ireland Screening this all may not have been possible.

“The support from Northern Ireland Screen throughout this has been great. They also funded production of a short film I wrote, The Last Letter, which was a kind of prequal to The Last Rifleman. It was shot in 2018 and premiered at a screening event at BAFTA in London which, in itself, was quite the experience. The objective of the short film was to help promote the feature film to potential funders and distributors and to get actors attached and it certainly helped with that.”

Although this had been a dream of Kevin’s from a young age, he now feels that this opportunity has come at the perfect time in his life, where it remains a fun hobby and the pressures exempt:

“I think if I had taken up screenwriting at a younger age, I would quickly have become disillusioned and most likely have packed it in. It’s a competitive and difficult field to get a break in. Doing it now, as a hobby and with half a century of life experiences behind me, is more rewarding and a lot less pressured.”

One would assume Kevin’s family would have been completely aware of the whole process with living under the same roof, but you would be wrong.

Kevin decided to keep it a secret from everyone bar his wife Arlene, and eldest son Blayne. There had been setbacks due to Covid so there was a chance the film may not have happened. However, he announced the news to his family and close friends last month and they were overwhelmed and emotional as they knew this was something he has always longed to do. His children Blayne, Megan, Caoimhe, Karl and wife Arlene are incredibly proud and excited for his new venture and to see Kevin doing what he loves.

Kevin said, “It’s true that up until very recently I kept my screenwriting from family and friends, for several reasons. Firstly, with pandemics and wars and false starts I didn’t believe we would ever get to making the movie. And secondly, I didn’t want it to appear to work colleagues that my focus was somewhere other than on my job. But it has been fun sharing these last few weeks with my family now that filming has started. My two sons and I even got to be extras in a World War II battle scene which was a real blast!”

This is only just the beginning for Kevin. After the filming for ‘The Last Rifleman’ wraps up there are a few more exciting projects in the pipeline:

“I’m still writing. I completed a biopic screenplay of Irish revolutionary leader, Roger Casement, which was optioned by the same producers, Wee Buns Films and I’m also adapting a novel for director Terry Loane which we hope will eventually be produced as a TV series. But my 9-to-5 job is still FM Environmental here in Newry and that’s where my focus remains as we continue to grow the business at home and abroad. Writing is just a pleasantly distracting hobby.”

Lastly, I wanted to find out what words of encouragement Kevin had for any aspiring writers out there who may think it is too late to chase their dreams:

“If I was to give advice to a budding writer, I would simply say just write. Hone the craft of whatever field you’re writing in whether that’s poetry, prose, journalism or even screenwriting. It might only be fifteen minutes a day, which in my case it often was, but at least you’re exercising the writing muscle in your brain. And if you love it, then just do it.

Filming for The Last Rifleman continues here and in France with a release date expected in early 2023.