A royal letter of thanks 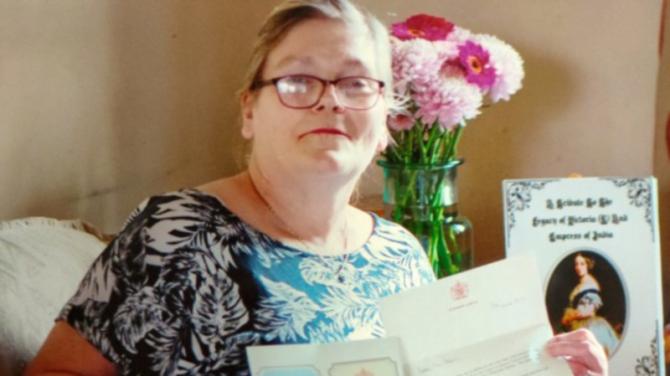 BESSBROOK woman Michelle Davis has received a royal letter of thanks from none other than the Queens lady in waiting Susan Hussey.

Miss Hussey, who is for all intents and purposes the Queens very own right-hand woman, addressed the letter of gratitude to Michelle in response to the local author sending of a copy of her book “ A tribute to the legacy to Victoria and Empress of India” to Windsor castle for the Queens consideration and enjoyment on the occasion of her platinum jubilee

Michelle, who is the wife of the locally renowned Bessbrook history aficionado John Davis, claims that although the book in question only took her eighteen months in total to lay down into print, the title itself is the “result of ten to fifteen years of reading about Queen Victoria , watching television footage and having knowledge of what was going on in and around her life” and that the book acts as a tribute to “Queen Victoria and Empress of India.”

After having sent the book to Windsor castle for the Queens consumption as a token of respect to mark her majesty having been on the thrown for seventy years, Michelle claims that she does indeed “feel a sense of great achievement on (her) part to have written a book and to have sent it to the Queen.”

“I am very proud and I do feel a sense of great achievement on my part to have written a book and sent it to the Queen along with a personal letter to her and for her to actually comment on it and receive a letter of thanks in response on June 30, having sent my own letter to her on June 2.

“It gave me a great sense of pleasure to write to her majesty and congratulate her on becoming the longest reigning monarch ( seventy years) on the British Throne as well as presenting her with a book I wrote ,A tribute to the Legacy of Victoria and Empress of India. The fact that she was touched by such a present and reiterated her gratitude twice made it additionally special to me.

The letter read as follows:

"Dear Queen Elizabeth the second, I am delighted to present to you my first book A tribute to the legacy of Queen Victoria and Empress of India for your enjoyment. I have had 10 years to research the literary documentation and two years to write it, eventually getting the book bound for private publication only. I hope you will read through the pages and enjoy reading it as much as I have delighted myself in its writing it. It is a great achievement of mine and I wish you a happy platinum year. Seventy years on the British throne. A remarkable milestone in your life and in ours. Take care mum, yours Sincerely Michelle Davis.

“On the front of the letter there is a picture of her and she is thanking me for the letter and she replied thusly. " I send you my grateful thanks for this kind message on the occasion of the seventieth anniversary of my accession to the throne.”

“The personal letter sent to me in response by Susan Hussey reads as follows:

"Dear Mrs Davis. The Queen wishes me to thank you for your letter of which you also sent a copy of your book, A tribute to the legacy of Queen Victoria and Empress of India as a gift to mark her majesty's platinum jubilee.

“The Queen was touched that you have given her a present. Her Majesty is interested to know of the years of work that you have put into writing this book and glad to that you have enjoyed your research. I am to thank you once again for your letter and your thought for the Queen in this historic year of her platinum jubilee. Yours Sincerely Susan Hussey Lady-In-Waiting.

I believe Susan Hussey is an affiliate with the Queen and she is in her inner circle.”

Michelle speculated on what thoughts the current monarch may have been thinking whenever she began working her way through the pages of the volume that Michelle has so painstakingly and tirelessly crafted in what can only be described as an absolute labour of love, claiming that she believes that Queen Elizabeth may very well have realised that the volumes author was looking at her own royal predecessor “as a woman and a girl as opposed to a monarch.”

“What I believe the Queen probably thought when she had read through the book and had seen the colourful pictures was that I was looking at Queen Victoria as a woman and a girl as opposed to a monarch. I have spent fifteen years documenting this monarch and I know everything about her, everything.

“I read through difficult works published by people such as Oxford and Cambridge academics and I found that a bit stuffy, but I tried to work through it. I also read through other authors, who although I did find a bit stuffy, do present Queen Victoria as how she was as a girl, a pubescent, and a young woman and a queen who was very complex and very determined.”

Michelle concluded by stating in her own words that although she does feel a sense of “kudos” for having written a title which is now going to permanently reside in the round tower in Windsor castle, above all else she is pleased that her husband John, who she describes in her book as her “rock and stay” “is so very proud of her”

Michelle concluded by expressing her delight at the fact that there exists the potential that her publication could remain in the archives in Windsor Tower indefinitely.

“Since there are only ten copies of this private publication written by me it could lend credence to the fact that this book, when read by her majesty could remain in the round tower of the Windsor Archives. I would be further delighted if this was true.”