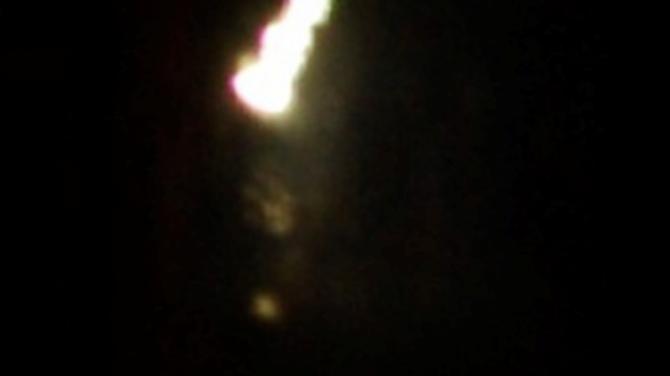 WHAT you are looking at is the somewhat unnerving image captured by local man John Davis at Bessbrook Mill.

Mr Davis has caught on camera what seems to be a disembodied human face hovering in mid air.

The haunting image was discovered by Mr Davis whilst he was reviewing photos of a strange fluorescent light which has been appearing in a window at the mill for the past ten years.

While at first glance the image may onlyshow what appears to be a bright light, upon closer inspection of the area below the light, one can clearly discern the visage of what appears to be a human face. Mr Davis claims these are the first human features he has ever caught in any of his photos taken at the mill, commenting that it is “quite eerie looking”

“I have taken multiple photos of the light but this is the first time I have ever captured human like features. You can clearly see a head in the photo as well as eyes and a mouth, with hair over the forehead and a jawline. This is quite eerie looking and I just don't understand.”

John, who is a passionate recreational photographer , believes that he has captured on film at Bessbrook Mill what very well could be presented as irrefutable evidence to prove that there may indeed be many otherworldly spirits inhabiting our mortal plain of existence.

John began to suspect that the Bessbrook Mill may be the resting place of revenants and sleeping place of spirits after he started to notice a strange light emanating from a window located on the second floor of the mills north side over a decade ago .

“It was in 2012 that I began to notice a mysterious light emanating from a window on the second floor of the mill, towards the north side of the structure. I just happened to be looking out and I spotted this light that caught my eye and I thought to myself, well all the electricity is off, all the old lights such as old battery and emergency fire exit lights should also be down, so where is this light coming from? When the power goes off the batteries take over but eventually they die as well if they are not getting fed with electricity.

“The time of day in which this light appears varies. It can be early in the evening and even during twilight hours and when it is still partially daylight it can appear as well. You can see it with the naked eye. The part of the mill where the light is appearing would be a very dark part of the building so you can see the light rather distinctly.

“Like I said the light has been appearing on the second floor of the mill and we can only see it from Mount Charles South.”

John claims that he can provide absolutely no rational explanation whatsoever regarding how this light, which according to his own eyewitness testimony has been appearing consistently within this room in the mill for the past decade, is being created.

He can say this with absolute certainty as he has exhausted all resources at his disposal to try and get to the bottom of this spooky mystery he has found himself in right outside his own front doorstep.

Well before the mill was bought over by new owners last year John ventured inside the room where the light has been emanating from with the intent of getting to the bottom of what was going on, but to no avail.

“I have been in the mill and I have looked around to determine if there could be anything reflecting or generating light from the room in question but there isn't a thing that could create the light that we are seeing. Any old batteries that were in the old lights in the building are all gone now. They have run out of power so there is nothing there to generate the light that we are seeing. Any old lights up in the ceiling are not reflecting either. Also, when I went in it was pitch black so it is quite the mystery where this light could be coming from.

“To prove my point I consulted with a few neighbours and notified them of the light to make sure I wasn't seeing things and they can definitely see the light also. So a number of eyewitnesses as well as myself have seen this light.”

Being the skilled photographer that he is John began to rigorously document this puzzling fluorescent phenomenon that was manifesting itself only a mere number of meters away from his house. However, it was whilst he was running his keen photographic eye over the images taken did he notice something that could be considered in equal parts both fascinating as it was terrifying.

“I noticed something peculiar in one photo of the light that I took on the 7th of November 2021. I captured this photo from the house, from upstairs with a 300 lense and it grabbed my interest.”

“I captured a picture of what appears to be a face that appeared in the window of the same room in the Bessbrook Mill that this strange light is emanating from. The face is quite clear in the photo and it is quite the ghostly image. It appears just below the light in the photo.

“I have taken multiple photos of the light that appears at the mill in the past, but this is the first time I have ever captured human like features in any of my photos. You can clearly see a head in the photo as well as eyes and a mouth and hair over the forehead. This is quite eerie looking and I just don't understand. I couldn’t see the face through the camera lense and it was only after I enlarged the photo with my viewfinder did I discover the face.

“The face in the photo is below the light that has been appearing in the room on the north side of the mill’s second floor.”

If you have difficulty discerning the ghostly facial apparition in the photo above please focus your attention to the area just below where the bright light is manifesting. You may get quite the spooky surprise!

If you wish to read more about the ghostly goings that have been reported at the Bessbrook Mill in the past as well as this journalist's first-hand account of witnessing the light that John claims has been appearing at the site for the past decade then don’t forget to purchase, you copy of this week's edition of The Newry Democrat.