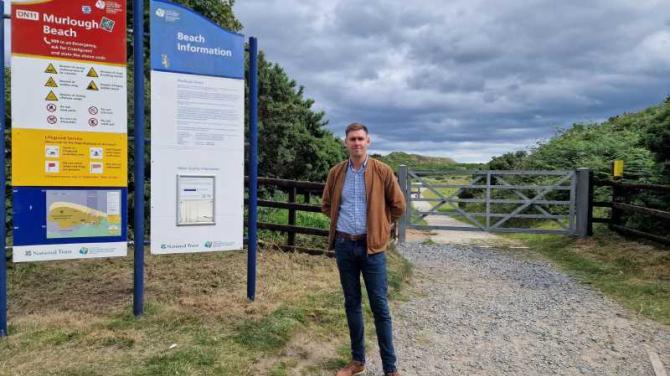 Patrick Brown MLA has urged caution at Murlough Beach following a number of fires caused by BBQs in recent weeks.

Mr Brown said: ‘I am increasingly concerned over the number of fires at Murlough beach, particularly after reports of two fires happening in one week towards the end of June, causing injury to wildlife and animals. BBQs can be very dangerous, particularly in warmer weather and in busy areas such as Murlough Beach. As we head in to the summer months and the beach is even busier, it is important to remember what the regulations are around BBQs, and the risks which are involved.’

He added: ‘BBQs are not allowed anywhere on any areas managed by the National Trust, and there are dedicated BBQ stands on the picnic benches in the two car park areas for this purpose. I want to strongly remind people that if not properly disposed of, BBQs can pose a threat to our natural environment, animals, and even lives, and encourage anyone having BBQs to do so safely. Murlough Beach is one of our most popular summer spots, and it deserves to be enjoyed sensibly by all.’

He continued: ‘I have written to council asking what steps are being taken to provide increased surveillance of disposable BBQs in the area, and for clarification of the numbers of enforcement officers being employed over the summer months, especially in Newcastle. In the meantime, visitors should remain careful and report any concerns they have with behaviour at the beach.’