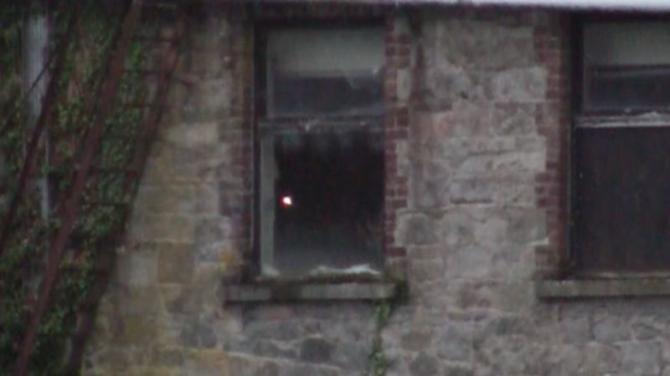 WHAT we have printed this week is stills from the somewhat unnerving videos shot by one Mr John Davis at the disused Bessbrook Mill in the Village of County Armagh.

The stills in question appears to show a mysterious bright light that John claims has been manifesting in a window at the mill for past decade from as early as dusk to as late as dawn.

John is at a complete loss to explain what this light is and would like to assure us all that he has exhausted every possible line of enquiry to try and get to the bottom of what could potentially be causing the light anomaly that he has been seeing for the past ten years.

Since the army left the building 15 years ago in 2007 there has been absolutely no electrical power going into the structure that could generate the light through any electrical appliances of the sort that one would typically associate with this kind of bright light, not that there are even any appliances of this sort in the room in question where the light has been appearing.

As already referenced the army requisitioned Bessbrook Mill during the troubles as a barracks, however after they left in 2007, they took all their equipment and gear with them. Mr Davis has checked the room in which this light has been manifesting to determine if any old equipment that the army may have left behind could be creating this light however there is absolutely no equipment of any variety in the room in question

Furthermore , to debunk the idea that the light could be created by someone entering the mill when they shouldn't, Mr Davis has on numerous occasions shined an extremely high-powered torch over to the window in question but the light has remained steady in place nonetheless.

If someone is trespassing into the Bessbrook Mill when they shouldn't then not only be they not scared away by this light that Mr Davis has been shining over to the window in question, but they have been doing so consistently for the past ten years on every night Mr Davis has observed this strange fluorescent phenomenon.

You can view the spooky vidoes that Mr Davis has captured with your own two eyes by visiting the Community/lifestyle section of the Newry Democrats website. If you think you can provide a rational explanation for what it is Mr Davis has caught on camera feel free to get in contact with us.