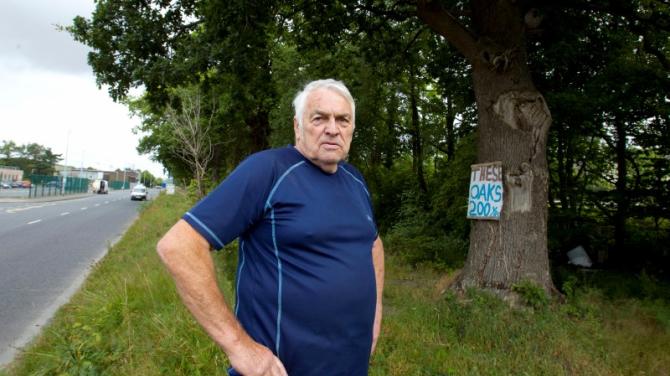 NEWRY resident Eamonn Burke says he is at a loss at the continued removal of oak trees on a road across from the Greenbank Industrial estate.

The trees , which have stood sentinel in Newry for over 200 years, were originally planted to act as a natural source of drainage for a small shuck nearby.

However since February the Department of Infrastructure have been removing the trees in order to facilitate for the construction of a new flood barrier alongside the road as part of the Newry flood alleviation scheme.

Mr Burke, who has been rigorously campaigning to have the trees protected since construction began on the flood barrier five months ago, claims that he “can't understand why it is the Department want to take the trees down,” especially considering the fact that a large soil bank has already been deposited in front of the trees which in his own opinion should act as sufficient enough protection against any and all flooding risks along the road.

Mr Burke stated that the road where the oak trees are located “never floods”.

“I am campaigning against the Oak Trees located clsoe to the Greenbank Industrial Estate being cut down.

“What I proposed at the very beginning after hearing the suggestion to have the trees cut down is that a soil bank be laid in place in front of the oak trees . This has since been done and the height of the soil bank has been heightened by a few feet and despite this the trees are still coming down.

“ I am totally at a loss and cannot understand why the trees are still being cut down despite the soil bank having been added in front of them to protect against flooding.

“All the Department of Infrastructure is concerned about is keeping the water out of the industrial estate but the area in question where the trees are located never floods. Also the trees are already doing a brilliant job of keeping the area from flooding because they are consuming roughly 500 to 2000 litres of water a day, this is what they were put in place for originally.”

Mr Burke highlighted the myriad benefits that the oak trees presence have for the local flora and fauna along the Greenbank road, with the Newry based environment enthusiast claiming that the “oak trees are doing half a dozen wonderful jobs near Greenbank.”

“The oak trees are helping the environment and they are doing half a dozen wonderful jobs near Greenbank and the Department wants to destroy them? I don't understand one bit of this.”

Mr Burke went on to cite numerous benefits detailed in a report written by a scientist he commissioned to examine the condition of the oak trees as the primary reason why he believes the remaining trees along road should not be removed.

“All you hear about nowadays is that we need to plant more trees and now they want to cut these oak trees down. I brought a man in who holds a Bachelor of Science in forestry and he wrote a report on the condition of the trees and noted in his report several benefits that oak trees have for the local environment and the wildlife that inhabit it.

“He noted that the benefits that the oak trees bring to the local environment include having over 200 insect species within the trees as well as the trees potentially acting as a roosting space for bats, with the surveyor questioning whether or not the Department of Infrastructure had carried out a bat survey on the site the oak trees are located.

“He also noted that the oak trees having a daily water transpiration range of 500-2000 litres per day, per tree. He also observed that the trees are of a high quality and will make a significant contribution to the area for the next 40 years as well as drawing attention to the fact that the trees themselves were planted to remove water and prevent flooding.

“Also, it is not a river that the Department are trying to protect against here , it is only a shuck. The trees were put there by the railway companies back in the day whenever they constructed the Warrenpoint railway line and they planted the trees for the explicit purpose of stabilising the shuck and draining the water up out of it. The trees do this by drinking the water out of the shuck with their roots.

“In addition to this the trees also serve the smae purpose that every other tree does as well, that being to absorb the carbon dioxide emitted from the nearby dual carriageway.”

In his efforts to have the remaining trees along the Greenbank road protected, Mr Burke has liaised with a number of local elected public officials to try and have the Department of Infrastructure reconsider their position on the removal of the trees to facilitate for the construction of new flood barrier in the area.

After having a local elected representative write to the Department on his behalf expressing his concerns regarding the removal of the oak trees, the then Infrastucture minister Nichola Mallon responded by stating that in her departments actions to construct the flood barrier along the Greenbank road considerable care “had been taken to limit the number of trees which are to be felled to facilitate the construction of the critical flood defences.”

"Thank you for the letter and email in relation to the removal of trees in the Greenbank industrial estate as part of the Newry flood alleviation scheme.

“In your correspondence you raised the query as to the possibility of the Department seeking a second option prior to commencing further works. I can confirm that two separate design consultants with expert knowledge in flood risk management have independently identified the need for a flood barrier at this location to prevent flooding emanating directly from the Knox Peebles Drain and affecting the industrial estate.

"The proposed alignment and consultation methodology for the flood defences has been carefully considered to minimise the potential impact on the local environment. Considerable care has also been taken to limit the number of trees which are to be felled to facilitate the construction of the critical flood defences and areas where trees and shrubs have to be removed to facilitate the works will be reinstated with similar species where possible."

Mr Burke csays he believes the removal of the trees will result in a public outcry throughout Newry, with one local public representative also telling him that he has learned “the trees are coming down.”

“There will be an outcry in the town if and when the trees are taken down, but at the minute there is no one concerned about them. There is no point in closing the stable door after the horse has bolted.

“I have asked every councillor in Newry to find out what it is the DFI are going to do with the trees and not one has found out yet. I was speaking to a to a local councillor recently and he told me that the trees are coming down. When I asked why he responded that he doesn't know. This is no answer.”

The Newry Democrat asked the Department of Infrastructure to provide insight regarding the ongoing work along the Greenbank Industrial estate road. As of the time of this paper going to print we have yet to receive a response from the Department.