Do it for Daniel at McKeevers Chemist 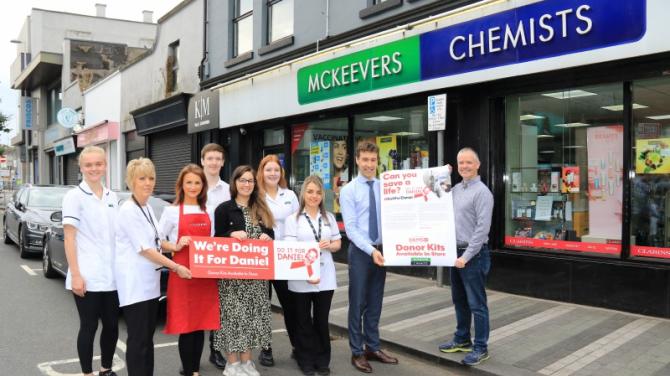 FROM this week McKeevers chemist will be acting as a drop in point for all those in the area who wish to learn if they could be the matching bone marrow donor needed to help Newry school boy Daniel Greer get back on his feet.

14-year-old Abbey Grammar student Daniel was diagnosed with Acute Myeloid Leukaemia earlier in the year and has since been searching for the one matching bone marrow donor he needs to make a recovery, with his family also launching the “Do it for Daniel” campaign that aims to raise as much awareness of Daniels situation as possible.

Those wishing to learn if they could be the one elusive donor needed to ensure Daniel gets back to leading a normal life as soon as possible need only pay a short visit to any of McKeevers chemist three sites in Newry, or the firms one store in Rostrevor, to carry out a quick three minute on the spot swab test.

The test itself involves a rubbing the inside of each cheek with three separate swabs before the sample is then sent to the blood cancer charity DKMS, whom McKeevers have allied with in their search to find a positive match for Daniel, to determine if you are viable as a donor.

A spokesperson for McKeever's chemist stated that it was after staff in each of their stores became aware of Daniel's circumstances that they became inspired to take action to aid in the mission to find Daniel a matching donor.

“McKeever's chemist was inspired to act as a drop in point for people to come in and test to learn if they could be a positive match for Daniel after the matter was raised to the management team by some of the staff locally.

“They had heard of Daniels situation on both local and national media and they asked if there was anything they could do to help. McKeevers chemist reached out to the blood cancer charity DKMS in London and got the ball rolling that way. DKMS run an initiative called a donor drive. However, normally these donor drives would take place over the course of only one day so what we in McKeevers chemist are instead doing is something different.”

The spokesperson for McKeevers Chemist was keen to elaborate on the what the process of determining if you are a matching donor for Daniel involves as well as the benefits that a drop in donor drive such as the one that McKeever's chemist are facilitating has over other means of trying to locate matching donors.

“You can come in to our pharmacy and a pharmacist is on hand to administer the swab. The process is not time consuming and is quick and simple. The swab test takes three minutes to administer with three separate swabs. The test is carried out by means of a gentle rub along the side of each cheek on the inside of the mouth, each at about three minutes a piece.

“ You also only have to fill out one form on site which is a consent form where you just have to register you details. Once the swab is done and the paper work is completed it is returned to us and it is placed in a sealed envelope and then we bring it back to our central distribution point and DKMS lift the swabs from us on a weekly basis. The purpose of the donor drive is to try and make the process a lot simpler and more streamlined.”

“What can sometimes happen with the likes of a campaign like this is that people would become aware of the situation that Daniel is in and they would think to themselves that they must register but then they forget about it. They may also remember to apply for the kit to carry out the test themselves and then they don't actually return the kit back in the post.

“Furthermore, if the drive doesn't help Daniel, it could help someone else. While we are working with DKMS there are other organisations such as the Anthony Nolan Trust and other organisations across the globe and they all work of one single database of donors. So, this means that someone who joins the register through the donor drive that Mckeever's chemist are facilitating could turn out helping someone in England or someone in England could help someone here or in another part of the world. It only takes one person.”

“We have seen a considerable number of people expressing their interest in carrying out on the spot swab testing in Newry and Rostrevor. Furthermore, people are learning about the swab testing on social media and asking if they can go into the other sites that McKeevers have around Northern Ireland to learn if they could potentially be a positive match for Daniel. This will happen in due course but it will be a couple of weeks down the line.

“ Our initial plan is to introduce the on-the-spot swab tests in the three Newry sites as well as the site that we have in Rostrevor. Once this has been ongoing for a number of weeks then it is our intention to expanding the on-the-spot swab testing to the rest of our stores throughout Northern Ireland. If DKMS also want us to introduce the testing to our stores in Liverpool and Manchester, then we will do this as well.”