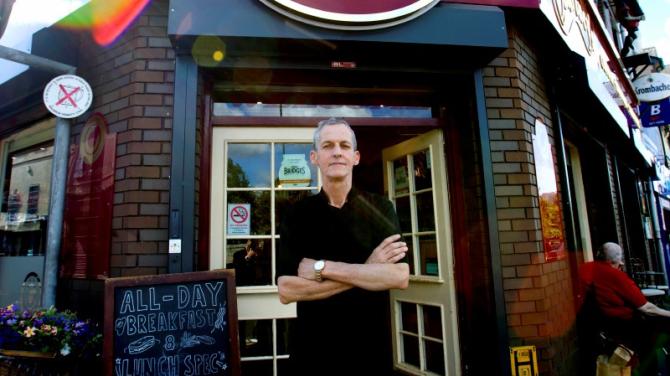 “IN my opinion I think you could see 25 percent of hospitality businesses close.”

This is the dire prediction made by local business owner Pat Courtney regarding the future prospects of the hospitality industry in Newry if immediate government intervention is not put in place to support restaurants and cafes in the area as they struggle to trade through the ongoing cost of living crisis.

Mr Courtney, who has worked in the hospitality industry for the past twenty years and now own’s Courtney’s steakhouse and cafe in the city, made the concerning comment when asked to relate his experience of what it has been like to work in what many now consider to be the most financially challenging period the hospitality industry has faced in recent memory.

“I have been in the cafe business for the past twenty years and this is the worst I have ever seen it and now is the hardest I have ever worked to keep the business alive. The government is going to have to step in, there is no question about it, if not we are going to have a crisis on our hands. We need to get Stormont up and running and these problems need to be addressed immediately. If not in my opinion I think you could see 25 percent of hospitality businesses close.”

MR Pat Courtney elaborated on the numerous increases in the prices of energy and commodities that Courtneys Steakhouse and Cafe has had to adjust to, with the local business owner stating that despite the difficulties these prices increases have posed to the day to day running of the restaurant he “doesn't think the true effects of the cost of living crisis have truly hit yet.”

“Since the end of the pandemic, we have been back trading in a full capacity and we are very busy, however we don't know what the future holds.

“We carried out a survey over a two-month period after we began trading again and we also carried out a price analysis of our three premises here in Newry. On commodities, that is the supplies we are buying in, we estimate that since the onset of the cost-of-living crisis the cost of purchasing all the supplies that we need to keep the business running has increased by about £1000.00 on a week-to-week basis.

“To give another example before the onset of the pandemic we were buying in cooking oil at a rate of £14.70 per 20 litres, this has since increased to £37.00 for the same amount of cooking oil. So this is a price increase of nearly £23.00. So, this is almost £40.00 for 20 litres of cooking oil. We would go through maybe 10 cases of 20 to 200 litres a week in the three premises, so if you add all this up of the course of the week it is a lot of money.

“Furthermore, I don't think the true effects of the cost of living and cost of doing business crisis have hit yet. I don't think the crisis has reached its peak yet under no circumstances. I think in the next six months we are in for a scary time.”

Mr Courtney concluded by stating that although he has been liasing with government ministers such as Conor Murphy, whom he states is well aware of the many challenges the hospitality industry is currently facing, in his own words unless a grant scheme is implemented to help businesses out “ we are in big trouble”

“I had a meeting with the finance minister Conor Murphy as well as Michelle O'Neill during election time. Unless they come up with some grant scheme to keep the hospitality industry alive, we are in big trouble.

“ Conor Murphy told me that he is going to implement a few things to help the hospitality industry but their hands are tied at the minute because Stormont is not up and running.

“ If the cost of living and cost of doing business crises continue for the next six months and there is no help from the government, I could see Courtneys perhaps reducing from having two cafes in Newry to one.”