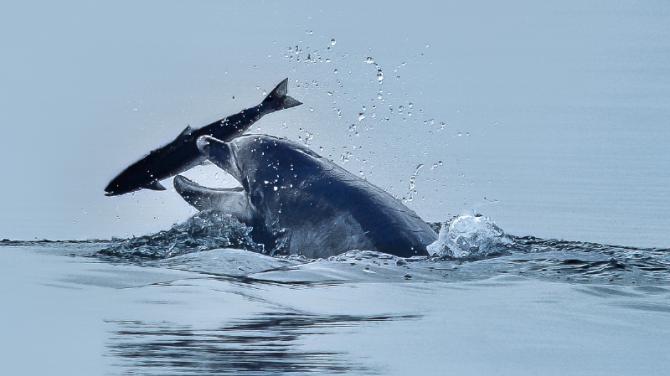 Carlingford welcomes a new resident to the Lough and he has attracted quite a lot of attention.

Photographer Damien Jackson from Waterford was one of the few who was able to come close to the new resident. Damien was staying in Carlingford on Thursday (28th June) as he had a job taking shots for the Triathlon Ireland in Kilbroney on Friday.

That Friday morning he decided to venture out at the early hour of around 8am to take some photos of the boats moored at Greenore beach. Although, due to the thick fog circulating the lough at that time in the morning Damien could barely see the boats. However, Damien was able to capture something far more exciting.

“It was a foggy very still morning so I went down to take some photographs of some little boats at Greenore and they were disappearing into the fog,” said Damien.

“ Then a fin appeared from the water and at first the dolphin was just doing the normal thing swimming around an then a few moments later the salmon appeared and that’s when the excitement from my end really happened."

"I had to grab a different type of lens and camera out of the bag and my hands were shaking with the excitement. I put on a much longer lens as he was about 40-50 metres from the shore at times. He would come up and throw this poor salmon across the place and the next thing he would disappear again and I didn't know where he was going to pop up.”

This performance between the two sea creatures went on for about 20 minutes and Damien took over 100 shots. Damien has shared the photos on his Facebook page and the response has been huge.

Damien has been informed that there could be more background as to why we are welcoming this new or perhaps usual visitor:

“A spokesperson from Dundalk Sub Aqua search and rescue said there is a pod of Dolphins off Wales every year that do a tour up the Irish Sea to Scotland and across to Antrim and up the East Coast of Ireland up to Carlingford Lough back to Wicklow and then Wexford.

“This has been well documented by the Whale and Dolphin Group, but we believe he’s an outcast of that pod and they were here again last month and Finn the dolphin stayed.”

“A spokesperson from Dundalk Sub Aqua search and rescue says they usually do dives in the lough and this dolphin would show up and accompany them on some of the dives when they swim around. He reckons they have come over the past three years and the man I spoke to on the beach says he reckons its four years.”

Damien believes anyone who is wishing to catch a glimpse of the new local resident should take a trip to Greenore and you may get as lucky as he did.

"It was a once in a lifetime moment, I may never see that again."