Procurement policies differ depending on parish 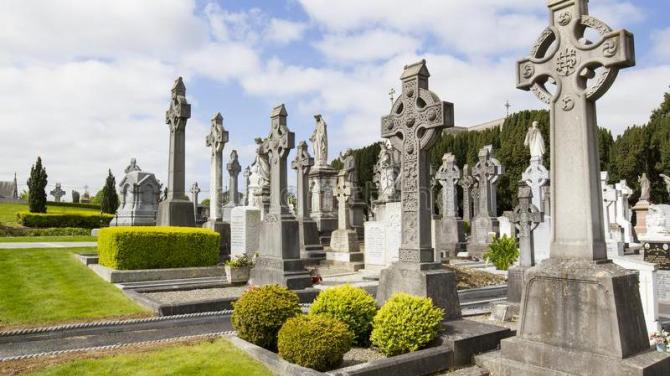 WHEN asked to provide some clarity on the policies regarding the procurement of burial spaces in advance in parish owned cemeteries, a priest within the Newry Mourne and Down area stated that such policies can vary from parish to parish.

“Regarding the procurement of burial sites in advance of a person's death, there are different regulations for different parishes. In my own parish cemetery the regulation was that someone could not procure a burial site for themselves or a relative until the person in question had died because there was and still is quite a limit on burial space. This also helps to keep the burial plots in rows instead of spreading out around the cemetery.

“When I first came to the parish that I am currently at now the regulation was that it was only when a person dies can a burial lot for them be paid for and secured if they did not have a grave already arranged for them. There was no reason to change this. It was my own parish committee and the priests before me who decided this before I arrived.

“There is also a practical element when it comes to people arranging their own burial plot in advance of their own death. The issue with the cemetery in the parish I am in now is that there is an old part of the Cemetery and then there is a big green empty space. It is easier if the new graves are cut in line rather than having graves dotted all over the place in the clear green area. If a lot of people came along who were in reasonably good health and wanted to purchase a burial site in advance of their own death here and there and in different places in the cemetery then it would be very difficult for those who are planning the structure of the Graveyard and cutting the graves to carry out their jobs and keep the graves cut in a line.

“Having said that there is no hard and fast about it. If someone was dying and was fairly ill and if the family wanted to get it sorted out then perhaps something could be done, So you can secure a grave for someone in my parish graveyard when a person does die, but this wouldn't be the case in the likes of a healthy young person. Also, sometimes in the likes of an old cemetery if there happened to be a space near the family grave then the family member would usually come along and secure for a space either in or as near to the family grave as possible as they do not want to be far away on the opposite side of the cemetery.

“I do know that there was an older cemetery in close proximity to my own parish where people would have wanted and arranged for a grave beside or close to their family members who had already died and they could arrange this in advance to the best of my knowledge , So as you see different parishes have different regulations.

“However, in the case of say a younger or older person who dies and doesn't have any family members to speak off they would just be buried along the graveyard line or whatever area in the graveyard that is practical to make the digging and cutting of new graves as easy as possible.”

Another undertaker from Newry providing further clarity in regards the policies that govern the burial of individuals in municipal Cemeteries, whilst also simultaneously providing detail on the cost of burials within council owned graveyards.

“At the minute the cost of a single grave in a municipal cemetery in Newry is around £263. I know from speaking to other people that parishes can charge whatever it is they want for a grave in a parish owned and ran cemetery. Furthermore, the main parish cemetery in Newry is Saint Mary's and there are no available plots that I am aware off that you can buy in advance. They have no land left. Saint Marys is completely full. If I wanted buried in Saint Mary's this would not be possible unless there was a family plot there already and there was room for me to go in to it.

“Within the Newry, Mourne and Down area we are very lucky that the cost of a single grave within a municipal cemetery is only £263. The cost of a single grave in a municipal grave site within the Belfast City council can be much more, because Belfast is a large city, land is scarce there. What they are doing in the likes of Belfast and Dublin is that families are buying plots of land between them and everyone is getting cremated so everyone can go in the one grave. In Newry we are in a very luck position. If you were to phone a funeral director in Dundalk, they could tell you that a funeral could cost, you anything from 5000 to 10000 Euro. The difference between the price of a funeral in Newry and Dundalk, withy Dundalk only being fifteen minutes down the road could maybe be £3000 or £4000.”