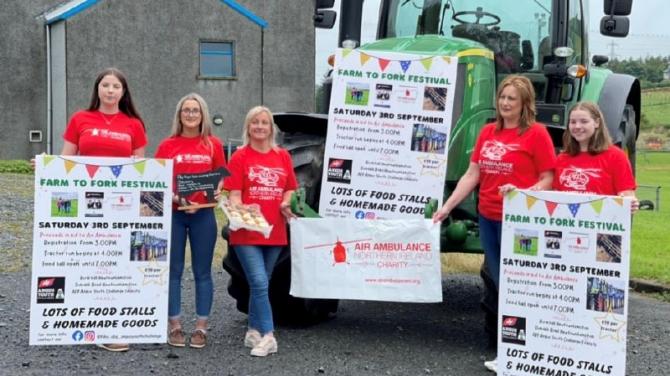 The festival will take place at the Rural Community Hall in Newtownhamilton with proceeds in aid of Air Ambulance Northern Ireland. The event emerged after the three students became finalists for the ABP Angus Youth Challenge and wanted to support a local charity before the new school year begins.

The Farm to Fork Festival kicks off with a tractor run at 4pm, with tractors able to register from 3pm for only £10. The food hall then begins at 3pm until 7pm with food and refreshments, as well as local stall holders and homemade goods.

The charity Air Ambulance NI (AANI), in partnership with the Northern Ireland Ambulance Service, provides the Helicopter Emergency Medical Service (HEMS) for Northern Ireland. The HEMS team attend patients who are seriously ill or injured, bringing emergency prehospital care direct to the casualty, with the aim of saving lives, brains and limbs.

The Helicopter Emergency Medical Service (HEMS) responds on average to 2 incidents daily, somewhere in Northern Ireland. Since the service first launched in July 2017, the HEMS has been tasked on over 3,080 occasions.

Regionals Fundraising Co-Ordinator for AANI Amy Henshaw commented; ‘We are so grateful for these young girls to be supporting their local Air Ambulance in such a unique way. As a charity we heavily rely on charitable donations from local communities. Currently, its costs £5,500 a day to keep the medical team in the air, delivering critical care to those who need it most in Northern Ireland. We are grateful for this wonderful support as without it, the team simply couldn’t fly so thank you sincerely’.