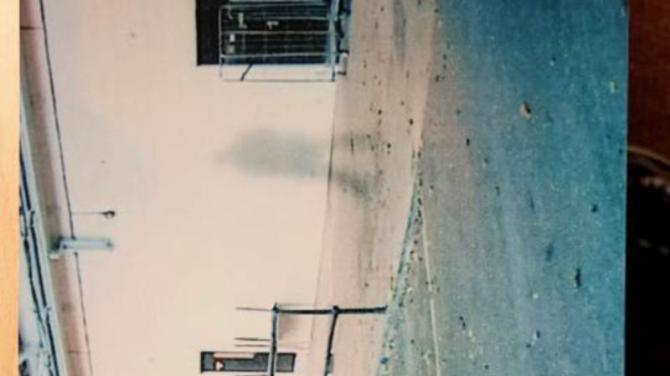 THE Newry Democrats resident paranormal investigator John Davis has brought to light yet another unnerving image that was captured within the structure of the now disused Bessbrook army barracks.

What you are looking at is an image that Mr Davis claims was captured by a soldier at the barracks at some stage during the late 90s within the buildings weavers shed which appears to show some kind of anomalous shadowy figure manifesting within the room that was then used to house army vehicles.

Mr Davis rigorous documentation of an anomalous light phenomenon that has been appearing at the Bessbrook Mill for the past decade appeared in the Democrat earlier this month.

And he claims that if you look closely at the figure in the photo (which is circled in red) you can clearly see what appears to be a “man walking across the room with his head bowed and his hands tucked into his pockets, almost as if he is wearing a coat or something.”

“What you are looking at is a shadowy apparition that was photographed in the weavers shed in the Bessbrook Mill at some point in the late 90s when the Mill was still used as an army base. In the photo you can clearly see what appears to be an apparition of something with two legs, a head, a torso and an arm. To me the figure in the photo looks to me like a man walking across the room with his head bowed and his hands tucked into his pockets, almost as if he is wearing a coat or something.

“There was no sunlight shining in the direction of the weavers shed where the shadowy apparition appears in the photograph and a shadow would only be cast if there was sunlight shining in that direction. Also, to the best of my knowledge there was no one else in the weavers shed at the time this photograph was taken other than the soldier holding the camera. I don't know why the soldier was taking the photos at the time , maybe he was leaving and he wanted to capture some images of the mill as a memento.

“The soldier who captured the photo gave a civilian worker who was stationed at the mill throughout its military tenure the photograph of the shadowy apparition who in turn gave it to me four or five years ago.

“The civilian worker explained to me that whenever the soldier in question who took the photo got the 35 negative print film developed the shadowy apparition appeared in the photo. The old saying associated with 35mm cameras is that the camera never lies and in the days of 35mm photos when a photograph was taken the lens saw what you saw and captures it. Whereas you can now airbrush images today that are taken on digital cameras.