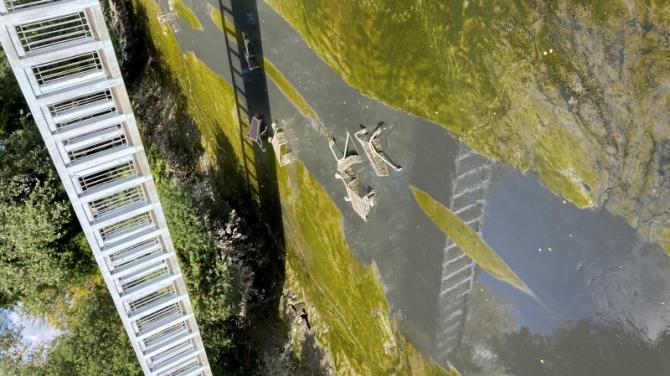 BUTTERCRANE manager Peter Murray has stated that he believes there needs to be a joint approach on behalf of both supermarkets in Newry and the council to remove any and all shopping trollies that have become submerged in the Newry Canal.

The trollies, which have become visible in recent weeks due to the low water levels in the canal caused by the recent period of extremely warm weather, are in Mr Murrays opinion very “unsightly” with the manager of the popular local shopping centre also commenting that “the problem of trollies being thrown into the canal is nothing new”

“The problem of trollies being stolen and thrown into the canal is nothing new, it has been going on for as long as I can remember around Newry. In the past there was concern raised regarding the number of trollies lying in the canal and as a result of this concern a consortium did come together to address the problem. Part of this was to recover whatever trollies were in the canal. Most of the trollies are identifiable because most of the Supermarkets that own the trollies have their brand name on the handle bars of the trolly.

“However, the likes of private supermarkets can't go into the canal themselves to remove their own trollies because there are all sorts of health and safety issues to consider. So, the council did do this a number of years ago because they are on the canal with their own boat from time to time however the council may also say that it is not their sole responsibility to remove all the trollies from the canal, don't the supermarkets also have some sort of responsibility in this endeavour as well.

“I am not sure of what the answer to this question is. You can't expect the likes of Marks and Spencer's or any other supermarket to get into the middle of The Newry Canal and trawl through the water to determine which trollies are theirs and are not theirs', so if anything is done to remove the trollies from the canal it needs to be a joint operation on behalf of both the supermarkets in Newry to whom these trollies belong and the council.”

Mr Murray concluded by making a direct appeal to any and all individuals within Newry who may be involved in the throwing of shopping trollies into the canal to immediately cease and desist in what it is they are doing.

“I would encourage the people who are throwing the trollies into the Newry Canal to desist from doing so. Some people may think it is fun to push their friend around in a trolly for ten minutes and then throw the trolly into the canal but the trollies that are now lying in the canal as a result of this behaviour are an asset to whatever stores that they came from. They were bought by the supermarkets that own them and they have to be replaced.

“ Furthermore, the stores that own these trollies don't want to lose them and I would say that each store in different ways implements some of their own measure to ensure they are not stolen. This can take the form of having a deposit paid on them or have a locking mechanism in place. They may also go out around the town with patrols to recover lost trollies or mislead trollies. Supermarkets buy in trollies at around a couple of hundred pounds now a days and they don't want to lose them, so they do take trolly management seriously but it is somewhat difficult to guarantee that no trollies are stolen”