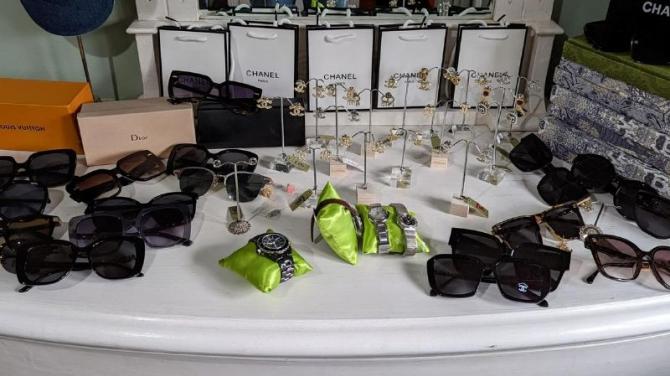 Organised Crime Unit Detectives have seized nearly 500 items of suspected counterfeit designer goods and seized a BMW car following the search of a residential property in the Newry area on Thursday.

Detective Inspector Conor Sweeney said: “During the search, we have also arrested a 65 year old woman on suspicion of a number of offences including selling counterfeit goods, possession of criminal property and the proceeds of crime act. She is currents assisting with ongoing enquiries.

“During the pre-planned search, we have recovered and seized hundreds of items of suspected counterfeit luxury items including jewellery, watches, handbags, purses and footwear. We suspect that many of these items were being sold for hundreds of pounds each.

“Counterfeit goods are typically and often supplied by organised criminal gangs and paramilitaries as a way to generate income. These profits can then be used to fund further criminality such as the purchase of firearms, drug dealing and human trafficking - all with the aim of lining the pockets of paramilitaries and criminals.

“Buying fake designer goods at lower prices may seem like a bargain, but consumers should ask themselves if they’re really comfortable with where their money is going. If the price seems too good to be true, it’s probably because it is.

“Whilst this may seem like a victimless crime, people should think about where those ill-gotten profits are going before they purchase counterfeit goods. Organised crime can only exist where there is a demand for its commodities. Everyone has a part to play - do not help fund individuals involved in organised criminality and enable them to exert more control and cause more harm to our communities.”

“The Organised Crime Unit remains committed to tackling all funding streams that help line the pockets of these groups. As always, we rely on the local community to help us. You can provide information by calling us directly in confidence on 101, or alternatively, information can be provided anonymously to the independent charity Crimestoppers on 0800 555 111.”