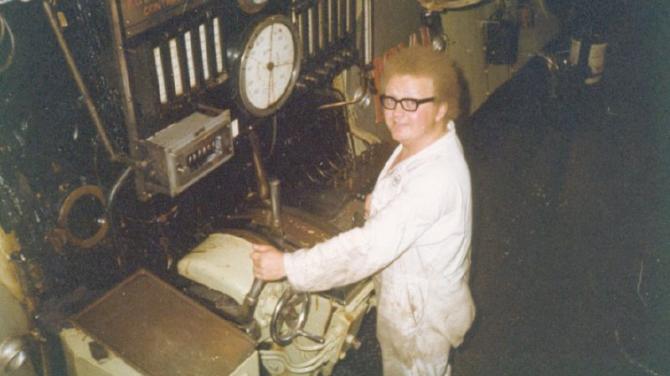 FOR many people two of life's greatest ambitions are to lead a worthwhile and fulfilling career whilst also simultaneously witnessing as much of the wonderful world that we live on as possible in the short period of time that we have on this Earth.

With a considerable amount of dedication, hard work and resilience, many of us may achieve the former ambition, whilst others may fulfil the later if they just so happen to have the right amount of wealth and free time at their disposal.

However, it is the very rare category of person that is able to achieve both of these two goals in their lifespan who is most deserving of our admiration and respect, and it just so happens that Rostrevor man Stuart Cooper is one of these people.

Having moved to Newry from Lancashire with his family in 1964 before joining the Merchant Navy ten years later as a junior engineer, a career which would see the young Englishmen traverse the world seven times in a career spanning 15 years in total , Stuart has had the privilege to see almost all of planet Earth’s many odysseys from the deck of a Merchant Navy vessel as it sails along the open sea, alongside having traversed the soil of many a foreign land when anchored in ports far away from our own beautiful Emerald Isle.

According to Stuart it was watching the Ferry boats sail back and forth to Omeath when he was a child in Warrenpoint that first planted the seed of interest in pursuing a career in maritime endeavours in his mind, a seed that would then be nurtured by one of his teachers in the Newry technical college while he was studying an apprenticeship in engineering.

“I served in the Merchant Navy, 15 years with Texaco and Dublin shipping. I started as a Junior engineer and worked my way up to being a chief engineer in those 15 years.

“I am English and I was born in Bolton in Lancashire but I moved to Newry in 1964 when I was 11 . My father was a textile technologist and he worked for the Lancashire Mills, he was the top of his field and he was recruited by an American firm to run a new factory in Newry called Ulster Textiles. So, the family moved here in 1964. In 1965 my father was made redundant but we decided that we would stay here instead of going back to England.

“It was watching the Ferry boats sail to Omeath that first got me interested in perhaps pursuing a career in the Merchant Navy. There was also a service in Warrenpoint called Irish sea ferries and these were a container ship that ran from Warrenpoint to Liverpool and for a couple of years in a row I carried out duties on this ship, the likes of engine room duties or being the captains message boy whenever I went ashore, things like that. I went to Newry High school and then I enrolled in a government training course in Craigavon to learn engineering trades. After the training course I served five years in an apprentice as a fitter in FMC in Newry which was a meat factory.

“When I was an apprentice in FMC, I was also in the tech here in Newry and one of the teachers in the TEC was a man called Billy Graham and he was an EX BP chief engineer and he talked to us a lot about the time he spent in the Merchant Navy. The idea of joining the Merchant Navy was already in my head, but he sort of sealed the deal. My cousin's wife was the Personal Assistant of the CEO of BP AND I asked her how do I get involved in the merchant Navy. She told me just to pick a number of companies and write to them. The first company to come back to me was Texaco. I was interviewed, I got the job and I was at sea two weeks later on the Texaco Southampton as the fifth engineer.

“When I was with Texaco, we would have been on ships for three years. I was stationed on the Texaco Southampton, Texaco Denmark, the Texaco Cardiff and then the Texaco Glouster. We had a great time, there was great camaraderie onboard as there would be on any ship and when I first started out I had a three-room suite in my cabin even though I was a junior engineer.

“My first voyage onboard the Texaco Southampton was a very memorable trip. We had four wives onboard and we had parties in the bar. Some of the wives were hairdressers and they would have generally looked after us. We would have also had a steward who would have looked after our cabin for us, he would have done your washing and ironing and have brought you your afternoon tea. At the end of the trip, you would have given him £10.00.”

It was owing to the practical skills that Stuart had developed throughout his fiver year apprenticeship at FMC Newry that enabled him to ascend the Texaco Merchant Navy’ s engineering hierarchy and stand out amongst the company cadet sailors also onboard the ship, a fact that Stuart claims “did cause some friction”

“There are two types of engineers in the Merchant Navy, there are company cadets and then you have people like myself who had served a full apprenticeship ashore. Because of the engineering skills that I had developed in my four-year apprenticeship in FMC Newry, I along with a lot of my shipmates who also served an apprenticeship on land, often found ourselves being asked to carry out duties that really should have been the task of the third engineer.

“This was because the third engineer wouldn't have had the engineering skills that we had already developed in serving our apprenticeship for a period of five years on land. Like I said I worked in FMC in Newry, which was a slaughterhouse. In FMC I would have been involved in carrying out duties that involved equipment that used compressed air, as well as electrical work and we used cranes and we were constantly fitting and repairing equipment and were installing new equipment. So, I developed a wide range of skills and gained a very solid basis in engineering from my time spent working at FMC. This would have sometimes caused friction but this was why I was hired by Texaco as an engineer in the first place because of the skills that I had already developed in my previous job.”

“I remember when I was on the Texaco Denmark they were looking for a welder to go underneath a boiler to fix a leak. This was a very difficult task, the heat of the engine room would have been maybe fifty degrees and under the boiler it would have been maybe seventy or eighty degrees which was really, really hot. No one came forward and said that they were a welder because no one wanted to fix the leak in the boiler. So, the chief engineer closed the bar on the ship until someone owned up to being a welder. So, I got on my gear and the following day the leak was fixed after I crawled underneath a three-foot space and welded shut the leak. It was quite a harrowing experience but the job got done. For this I was awarded a case of beer.

“Another memory that also stays with me is from my time spent onboard the Texaco Southampton when we were going up towards Anacortes's which is up near Canada. The ships emergency CO2 smothering banks leaked carbon dioxide into the main engine room and we were thirty hours from port. John Clark who was the second engineer came down in a BA suit and asked if I fancied making a name for myself? I asked him what it is he meant by this. The problem was that although the CO2 had been shut off, they couldn't tell if the CO2 was still leaking into the engine room or not, so we had to wait until we got to port to get this problem fully resolved. The control platform and the boiler room were two separate compartments. So, I as a fifth engineer was standing controlling engine movements, stopping, slowing down and speeding up the ship whilst my second was down in the boiler looking after the boiler. For thirty-six hours we were down there in BA suits before we finally did get into port. In the meantime, the crew were bringing us down new oxygen bottles every hour. I didn't really mind this though because I was driving a ship with a 33,000 horse power engine.

“I received a promotion on every ship I was on after the Texaco Southampton. I was third engineer for about three years and then I did my second engineers' ticket and passed this and then got a Junior second engineers' job and then shortly after this I left Texaco and went to Dublin shipping. In Dublin Shipping this is where I went to do my chief engineer's job on a ship called the Rathmore .”

Despite having hung up his engineers uniform over two decades ago, Stewart would still encourage any and all young people who may be leaving school or college and are unsure as to what it is they want to do with themselves to consider a career in the Merchant Navy, as according to Stuart a life at sea “is a fantastic experience.”

”My life at sea was fantastic and I loved it, I have been around the world seven times and a lot of my friends are still at sea. I would advise any young person leaving school who are unsure as to what to do with themselves to go and join the Merchant Navy and to do it for a few years to see if they like the job. A career in the Merchant Navy will get them out and about and having a look around the world, it’s a fantastic job.