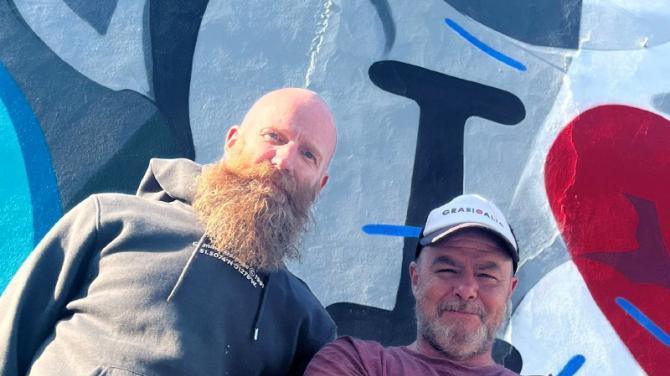 The community has welcomed this bright inspiring piece of street art to the area in hopes it will bring a brighter future.

The mural was created in connection with the Iúr Cinn Fleadh that took place on 25-29 August. It was created by two brilliant Irish street artists Jonny McKerr (JMK) from Lurgan with and Dermot McConaghy (DMC) from Armagh.

Active member of Newry 2020, Garry McElherron takes charge of the art aspect of the festival. The Iúr Cinn Fleadh festival brought people from all over to enjoy Irish music, comedy and art and this year Garry wanted to bring some thing different to the festival. He believes that the new mural is about making each person of Newry feel like "a first-class citizen. "

He continued "I want to feel like a first class citizen and I want the kids of Newry to feel like first class citizens. This mural basically represents a proud Newry fella whose been bought an I heart NY t-shirt but he’s taken his own pen and he writes EWR as NY means nothing to him, but his hometown does. You have the Mournes behind him and the city of Newry, it’s just an upbeat peace, its positivity for Newry and about looking forward."

The new modern work has caught the attention of the community and sparked the curiosity especially of the younger generation in Newry:

Garry stated: "It was really cool to see the amount of kids that came by on their bikes watching the guys paint and the kids were gobsmacked. They thought it was just so cool and they were asking what does it mean and when I pointed it out they thought it was class. It’s about having respect and liking where you come from because it’s cool, and instilling a bit of pride in your area."

In recent years Garry has worked closely with Southern Regional College through the Hill Street Festival of Window which has enabled aspiring artists’ works to be admired by the public on display in shop windows on Hillstreet.

However, after 6 successful years of doing the Hill Street Festival of Window Garry decided this year for the Iúr Cinn Fleadh he did not want anymore art on boards. Garry went to the owner of 'Sinéad's of Newry' on Canal Street, Bertie Flynn and put forward the idea to have a mural painted on the side of his premises. The first-year funding fell through but a year went by and the next time around they had the go ahead. Garry and the team are so grateful to Bertie and his wife Noreen Flynn for allowing them to use their premises to showcase the art.

Garry made reference to Dundalk and the large number of murals in the area and the tourism benefits it has brought to the area as people can now come and have a tour of all murals and take in the sights. The creation of these murals started in 2019 and they have created so much in such a short space of time.

Garry and the Newry 2020 team have been offered two more walls in Newry to showcase the skills of the brilliant artists Ireland has to offer. He cannot say where but there is also a wall in Warrenpoint that will soon be wearing one of these incredible designs. Although, Garry still is reaching out and encouraging other business owners to consider allowing a mural to be painted on their building.

"JMK is from Lurgan and DMC is from Armagh and they just love what they do and I don't want to say they’re shy but they just don't like all the attention that goes with it, whereas at the minute I am wanting to put myself out there as I want people to say I have a wall for you and a little bit of funding for you or we would like to sponsor the wall."

"If we get the wall, it’s just a matter of lining up funding and lining up an artist, I make it sound simple but that is what you do."

If you have building that you would like Garry and his team to showcase one of the incredible murals on then get in contact with Garry through email: info@newry2020.com