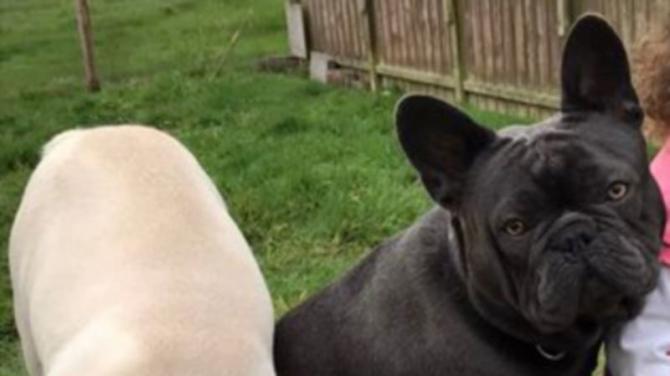 MARKETHILL woman Eileen McGeown has made a heartfelt appeal for the return of her two missing French Bulldogs Alfie and Bruce following their possible abduction from the Armagh road earlier this year.

Alfie and Bruce (pictured right) first went missing on July 10 after they wandered out through an open gate in Eileen’s backyard which would normally always be kept closed.

Despite exhaustive efforts on the part of both Eileen and her husband to search for Bruce and Alfie on the day the dogs disappeared, neither were found in the immediate vicinity of her home, with Eileen speculating that they may have wandered as far as the Gosford Forest Park on the Armagh road were they could have been picked up by someone passing by in a car in the space of time that they were missing.

Since the disappearance of her two beloved dogs Eileen has since undertaken an exhaustive appeal on social media to try and locate Alfie and Bruce, whom according to the South Armagh woman are very “friendly and loveable”, with an award of £1200 being offered for any information that could lead to the location of her cherished pets.

Eileen elaborated on how well the appeal for infomation has been going since Alfie and Bruce went missing, relating the fact that she believes she may have been in contact with the individual who now has the two French bulldogs in their possession.

“Both Alfie and Bruce are absolutely lovely, they are so friendly and so loveable. Alfie has had two major operations to help deal with the breathing problems that you often encounter with the French Bulldog breed. He has had his pallet shortened twice and he has had his wee nose opened as well.

“We have electric gates in our houses garden, we installed these to keep the dogs in. We have a really big garden in our house that is ideal for French Bulldogs. We would always usually check to make sure that these gates are closed . However, on the particular Sunday in July when Alfie and Bruce went missing, we forgot to check if the gate was closed. So with us not realising the gate was open the dogs got out. They were out for about half an hour before we realised that they were gone. This was on July 10 so Bruce and Alfie have been missing for seven weeks Sunday past.

“About five days after the dogs went missing and after we had made an appeal for information on social media, we got a call from someone who claimed that he lived in London. This individual claimed that they saw the Alfie and Bruce for sale on Gumtree and that he had bought them for £500.00 each. Whilst I was a bit dubious, I continued to listen to him however the conversation ended with this individual telling me that he had my dogs and that he was "going to kill them" and that they were "as good as dead". After he said this, I realised that this was a hoax phone call so I put the phone down on this person.

“The following night at 1 o'clock in the morning I received another call from a different individual on my mobile phone. When he spoke to me, he spoke like a young local fella and he sounded very nervous. He asked me if I was the woman who had lost my dogs? I responded that yes, I was. He then replied by saying that he had both of them in his possession. He told me that he wanted to keep the blue dog which is Bruce, but he was unsure what it is he was going to do with the cream dog, which is Alfie.

“I published a post on social media a few days after this telephone call explaining that I was the recipient of a hoax call the night before and that I would like him to call me back. As of yet however hasn't called me back since July 16. Unfortunately, when he did call through, he left no number as his caller ID was withheld. I was in contact with the police and I asked them if they could trace the first hoax call made to my phone by the man in London and they told me that they couldn't do that, so I assume that they also cannot trace the call made to my mobile on July 16 which I believe to have been made by the man who does indeed have Alfie and Bruce in his possession. This is because his callers ID was also withheld. I also asked my phone company if they could trace the first call and they told me that a call of that nature could not be traced because the callers ID was withheld. So, my hands are tied.”

“I would like to make a direct appeal to the individual whom I was speaking to on the phone to please return Alfie and Bruce to me. I beg you please give my dogs back. There will be no hard feelings as Alfie and Bruce belong here with me, I just want to get them back, that is all. I would be so happy to get my dogs back that I wouldn't care about anything else as long as they were returned to me safe and sound.

“My heart is broken because for me Bruce and Alfie being missing is absolute torture. I am not sleeping at night and I am worrying every day about their welfare and the circumstances they may now be in. I am wondering if they are being looked after or if they are stuck in a cage somewhere, it doesn't bear thinking about. I can understand why it is someone would lift Bruce and Alfie from the road as I myself am a dog lover and can understand why it is you would lift them from the road if they were wandering about on their own as you may think they are in danger. However, with every day that goes by I lose a wee bit of hope that they will be found.

“Not only that but there has to be other people who would be in regular contact with the man whom I was speaking to on the phone who knows that he has appeared with two dogs that he didn't have before. Perhaps they didn't realise that they are missing dogs but after they see the posters, they will realise they are mine I would like to make an appeal for these people to come forward with information as well.

“This is what I said on my last Facebook post, someone out there knows something, they are bound to. They can either call the police or call my mobile number. There is a £1200 reward available for anyone with information that could lead to Alfie and Bruce being found safe and sound.”

If you believe you have information pertaining to the whereabouts of either or both Bruce and Alfie you can call Eileen directly on her mobile number of 07584571603. Alternatively you can contact the Newry Democrat offices on 02830251250. You can also direct any email correspondence to daniel.hill@newrydemocrat.com