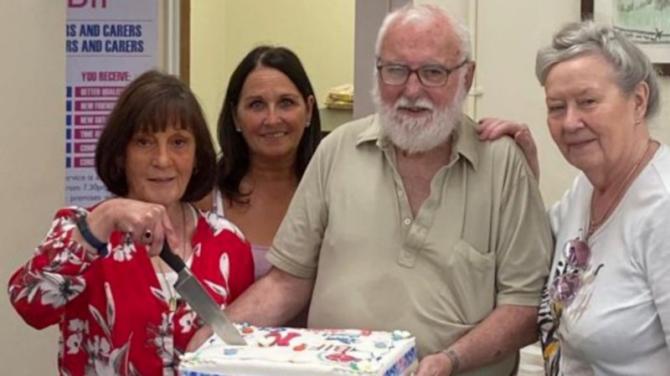 The Brain Injury Foundation was formed in 2012 by a group of brain injury survivors and carers with the aim of improving the quality of life across the Southern Trust for anyone affected by brain injury.

Originally based in Altnaveigh House in Newry BIF opened Northern Ireland’s first community owned centre of excellence for brain injury in Camlough in 2015, opened a horticultural project in Milford, County Armagh in 2017 and then opened an activity centre in Armagh City in 2021.

BIF is unique in that it is owned and managed by brain injury survivors and carers.

Almost 50 members from all over the Southern trust came together for a birthday barbecue in Camlough.

Many messages of congratulations were received. Jackie Coade, Alliance Party Representative from Armagh, said “Congratulations on such a huge achievement.

BIF demonstrates so much compassion, understanding and empathy for all who walk through your door. You give people hope, encourage independence and make people feel they can achieve anything. You have given people their life back. I have been lucky enough to see all this first hand and it’s always a joy to be see everyone in the group.”

Sharon Carragher, a former tutor with BIF before she moved to Meath, said “Credit to each and every one of you. You are all amazing. From working first hand in BIF and seeing the work you do to help provide a safe environment for everyone to prosper, gain back independence and to become part of one of the warmest family units I have ever seen. To the BIF family enjoy, your celebrations, have a wonderful day. Here's to many, many more years of creating a much needed home from home environment for Brain Injury survivors and carers.”

said “We are delighted to see so many members here joining in our celebrations and I first want to pay tribute to the group of survivors and carers who had the foresight and energy to set up the Foundation ten years ago. On a personal level, BIF has been of amazing support to me as a carer and to my husband Patrick who sustained a severe brain injury. Our lives have literally been changed by the friends we have made, the activities we have attended, the skills we have learnt and the craic and enjoyment we have with all our members. We are very proud of our centre here in Camlough, of our pub with no beer, of our allotment in Milford and of our base in Armagh at innovation Works.

We had a great summer with our range of day trips and our fabulous five day break in Sligo. I hope our original founders are pleased with what their initial courage has helped to create. Thanks of course are also due to our staff and volunteers and especially to our members and most importantly our funders, particularly the Community Lottery, the Community Foundation and charities such as Henry Smith and ARN. We receive no government support so their funding has been crucial. We have a new committee in place as we move forward into our next decade and we are really excited by the ideas we have for the future.

A birthday cake was cut by Bronach Rooney as current chair, Frank and Aileen Dolaghan as founder members and Olive Hawthorne as Manager.

As always, BIFFERS try to entertain themselves and so music, songs and stories were contributed by Charlotte Haffey, Pauline Magee and Frank, carers, and by survivors Ryan Donaghy and Shane Sands.