Queen Elizabeth and The City of Newry 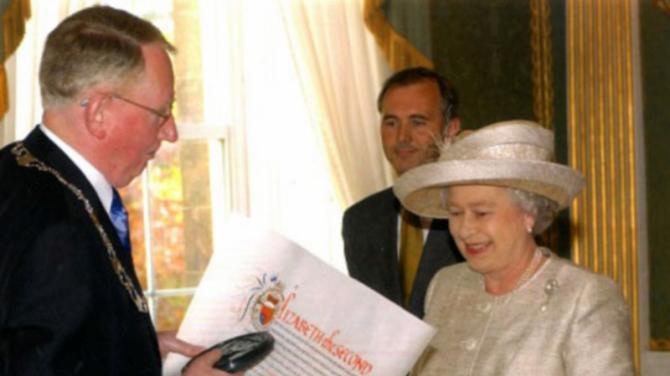 The death of Queen Elizabeth has been mourned throughout the World, including the Newry and Mourne and Down District.

The Monarch passed away at her home in Balmoral.

Back in 2002, Newry was one of several towns from the north whose bid for City status was granted as part of the Queen’s Golden Jubilee celebrations

The Letters Patent document marking the granting of city status was endorsed by the Great Seal of the Queen’s family at a ceremony in Hillsborough Castle on the 14th of May 2002 and Newry and Mourne Vice Chairman Frank Feeley was there to receive the document from The Queen.

The Clerk of the Crown for Northern Ireland, Mr John Wilson QC, read the official announcement before the Council.

Speaking at the time, Queen Elizabeth asked what size was Newry and how City status being conferred made the citizens of Newry feel.

Mr Feely responded that there were about 35,000 people although Newry and Mourne itself had around about 90,000 people, the third largest population area in Northern Ireland.

Mr Feely said City status would be very important to the people in helping to develop Newry.

About forty guests waited in the Throne Room of Hillsborough Castle, twenty of whom had travelled as part of the Newry delegation.

After the presentation The Queen spoke with several of the guests.

“I feel very happy about receiving the City Status and have no problem in meeting The Queen as it doesn’t diminish my Irishness or sense of identity grounded as it is in the Goof Friday Agreement.

“I feel certain that City status will improve the whole area and make it even more attractive to investment, industry and tourism.”