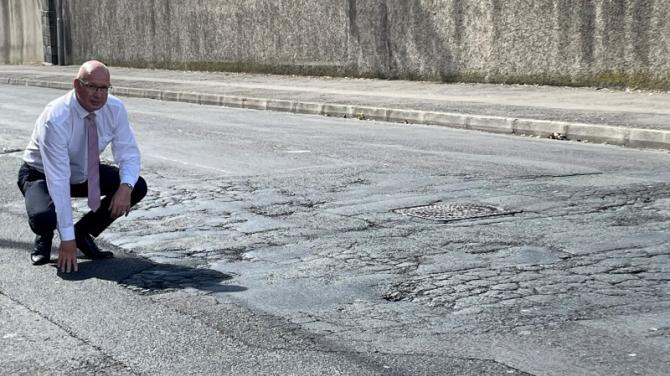 Plans are being finalised to carry out resurfacing to two of the worst road surfaces in Newry at The Glen and Catherine Street, local SDLP Councillor Michael Savage has confirmed.

Cllr Savage said: "I am delighted to see multiple resurfacing schemes that I have been pressing for across the city finally underway at Cloughoge Heights, Windmill Road and Boar Street to name a few however I was concerned that two of the worst surfaces in the city at The Glen and Catherine Street were not included in the current programme. As a result I wrote to DFI on August 17th seeking clarity and received updated commitments from Roads Service.

"Subject to contractor and funding availability it is envisaged that resurfacing at The Glen will happen later in the current financial year which is likely to be late winter/early spring 2023 but the resurfacing at Catherine Street is not scheduled until next summer when schools are closed.

"The good news is that the Department now has a resurfacing contract in place for the Newry Mourne and Down Council area and subject to the availability of funding, the majority of schemes that are currently on hold due to previous contractual issues, including The Glen and Catherine Street, will be carried out as quickly as possible. This is evidenced by long overdue works finally getting underway across several locations across the city in the last week or so.

"I will continue to press Roads Service to ensure adequate maintenance of any defects at The Glen and Catherine Street are carried out urgently and lobby for the earliest start date possible for both schemes."