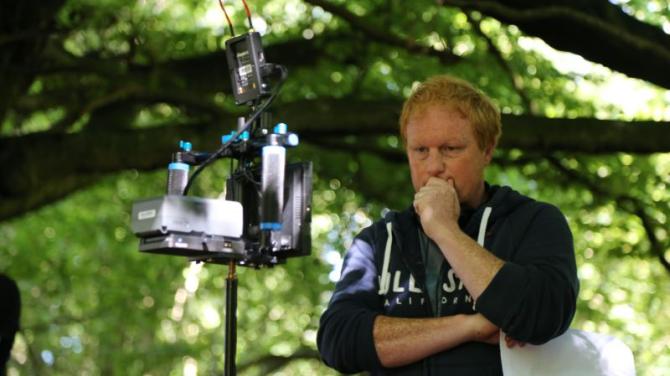 PART of the County Down countryside has been transported back to the penal time in Ireland, for an imaginative film called “Faith of our Fathers”.

Global TV network EWTN is behind this new production currently being filmed on the beautiful grounds of Dromantine Retreat & Conference Centre outside Newry, County Down.

The film tells the story of a Catholic Priest hiding in fear of the austere laws of the time, and the whole community’s efforts to shelter him as he ministers through the hedge schools and Mass

Rock to strengthen the faith of the people. Katrina Doran from Newry is Hair & Make up Designer on the film set. A past pupil of Our Lady’s

Grammar school, Katrina said “It’s been great fun. As designer I do lots of historical research for the time period to come up with all the looks for each of the characters. For certain scenes the director showed me reference pictures and then it was my job to bring that to life. I then brief all my team and it’s a collaborative process coming up with the looks that are on the film. The cast are amazing, as are team that I work with.”

The production involves over 90 people including actors, extras, film crew and all those working behind-the-scenes over the many weeks of production.

Newry man Aidan Gallagher is Executive Producer of the film commissioned by EWTN. Aidan said “The actors and crew we have working on set put a huge effort into making this a quality production. They’ve given this film a powerful authenticity, set in the penal times period of our history, on which we have based our story. We are also very grateful to Dromantine itself who went to great lengths to make our stay a very pleasant and memorable one. The amazing beauty of Dromantine, the lake and forest walks, will look brilliant on the big screen especially to an international audience.”

The film juxtaposes the strong and unyielding faith of people during Penal times, compared to the trend towards indifference in modern day.

The Irish language is spoken in various scenes of the film which further enhances the realism of the production.

The film’s director is Newcastle man Campbell Miller, who works from Newry, and is a multi- award winner for his previous work in film. Campbell said: “As well as our amazing actors, the Camera, Costume, Make-up; and Art Departments have been incredible in making the story a reality. Everyone is working so hard behind the scenes. The film is coming together well and is looking good. I think we will get an amazing result.”

The film is due for broadcast in 2023 on Sky 586, Virgin Media 815, Amazon Prime, Netflix, and 11 satellites globally, as well as streamed on other platforms & networks around the world.

The production team’s three previous films HOPE; BRAVERY UNDER FIRE; THE PRODIGAL SON have each been screened in the Vatican Filmoteca in Rome and presented to Pope Francis. The HOPE film also won the prestigious international Global Gabriel Award in 2020.