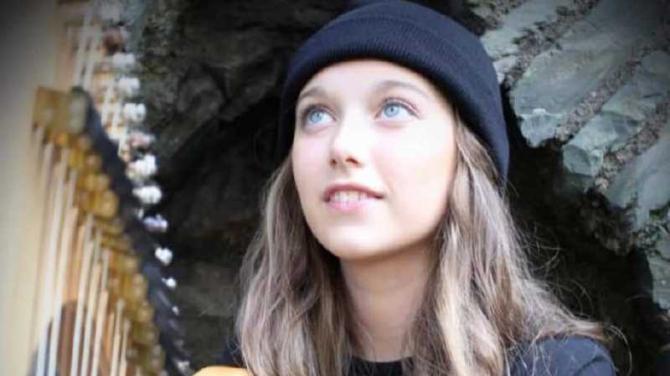 THREE talented local girls could be in with a chance of flying the flag for Ireland in this years Junior Eurovision.

Dreams do come true as on TG4 on Sunday night young Gilford girl, Clare Keeley got through to the Junior Eurovision live semifinal in the hopes to be the representative for Ireland in Armenia this December. In the upcoming weeks the talented Sophie Lennon (Mayobridge) and Niamh Noade (Lislea) will also take part in their heats and fingers crossed will have the same success. The three girls all go to schools in Newry with Clare (12) 2nd year in Our Lady's Grammar School, Sophie (12) 2nd year at Sacred Heart Grammar School and Niamh (14) 3rd year at St Pauls High School.

All three girls are singing pupils of Fiona Flynn at Flynn Performing Arts School and it's safe to say that Fiona feels like the "proudest teacher on the planet."

"I really am so proud. I know the girls all work so, so hard and are great friends with each other as well which is just lovely. They support each other and are all rooting for each other on their own journey. It is an amazing opportunity for them and I am so proud that they have got this far. Anything after this is a complete bonus.”

"The three girls are all going to be on the television and the world will see how good they are. They are such talented girls who work very hard and they deserve every success! I am delighted to be part of their singing journey.”

There were 4000 applicants for the competition and from them 200 were chosen to go down and audition in person at the RTE Studios in Dublin. The three girls were then three of the 24 chosen to compete in the televised live heats. There will be six in each heat and from each heat two will go through.

With Clare getting through to the semi- final live shows Fiona is just delighted and is looking forward to seeing how her other two pupils will do.

Fiona stated, "I am so thrilled that Clare’s hard work has been recognised on television and everyone can see what a star she is. I am the lucky one who has got to preview all 3 of the girls performances in their lessons. I am delighted that Clare has made it through to the next round and I wish Sophie and Niamh all the best in their heats because I know how hard they have worked too.”

The girls have all been showcasing their vocal skills through songs selected for them although that has not been their only challenge. Each girl has had to learn the lyrics to their songs in the Irish language and all have never spoken Irish until now.

Fiona exclaimed: “It’s all well known music that has been chosen for them and translated into in Irish. It’s part of the learning process and an added difficulty for all of them, but they have all risen to the challenge. "

“None of them actually speak Irish, I do speak Irish myself, but they have had to learn to sing in Irish, and also do their interviews and conversations in Irish as well. So it’s such a big challenge for them, it really is, so fair play to the three of them for taking this all in their stride.

Fiona formed Flynn Performing Arts in Newry back in 2015 and since then the school has "gone from strength to strength.” Fiona is the only singing teacher at the school and is still in shock that three of her pupils from the 4000 applicants could be in with a chance of waving the flag for Ireland in the Junior Eurovision.

"We are at our full capacity, but I love every minute of it. Pupils come from all across Northern Ireland and I feel so privileged to work with such talent. I genuinely can’t believe it, from 4000 applicants down to 24 and 3 are my students.

You can tune in and support the girls over the coming weeks. Watch Niamh Noade - Heat 3 Sun 2nd Oct and Sophie Lennon - Heat 4 Sun 9th Oct.