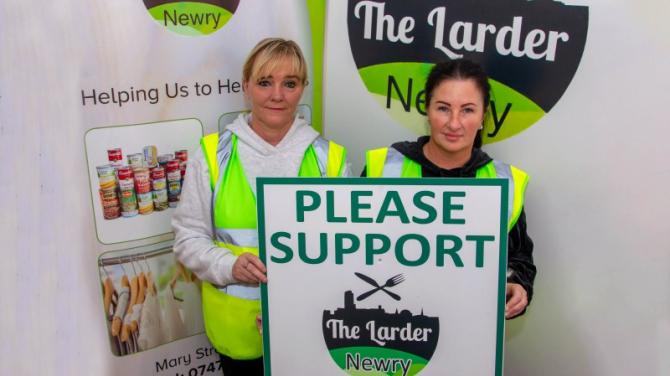 NEWRY’S only food-bank volunteer Stella Maguire has warned a bleak Christmas is around the corner were turning a lights on at home may become a luxury for some.

Stella runs the Newry Helping the Homeless group and the food-bank in Mary Street in the City and has launched her Christmas appeal to help families with food parcels, heating and electricity. Dry food, meat vouchers, cleaning products and toys are most welcome.

The rising costs of almost everything is putting a squeeze on many in Newry and Mourne and more people are turning to food banks to help their purse spread future and Stella says that she has encountered parents worried about how they are going to cope this winter.

“We have discovered that while people are thinking about Christmas and a lot of the mummies are coming to us and saying they are not really worried about what is going to be under the tree they are more worried about if they can turn their lights on at Christmas,” said Stella.

“While it is about getting kids through Christmas and Santa being ok, but what is important now is where they go from heating to eating, that is the thing they are worrying about.

“The price of everything is going through the roof. People are concerned about turning on lights and when turning on your lights starts to become a luxury then there is something wrong.”

Many families in Newry and Mourne are one or two pay-cheques from being homeless and Maguire says that the food bank is providing a much-needed service for those trying to make their wages stretch as well as vulnerable people without employment.

“It could be you this week,” said Stella.

“Maybe you have got paid at the start of the month and you have had to put a fill of oil in, that’s a huge chunk of the wages gone. It is not just people on benefits it is the working-class people who are going out doing their work, coming home, and realising that their wages are not going up but the prices of everything else is.”

Gas, oil, coal and fuel prices have soared in recent months. Blame it on the conflict in Ukraine or greedy corporations, many of our politicians seem to think that the free market will sort it out, but that theory has left more families behind than improved living conditions over the past 30-years.

When food banks are becoming the norm, the system is broken but Stella insists that help is out there and local businesses are doing their bit to help struggling families in the Newry area.

“We are the only food-bank in Newry,” Stella said.

“There are other organisations and local community groups are doing food parcels. The likes of Bolster would refer people to us, the doctors, social services and the PSNI, PIPS, Housing Executive are all able to and do refer people onto us.”

“We have one local business [Malone Accounting Chartered Accountants] who filled it yesterday and they have agreed to do it again, which is brilliant,” said Stella.

The food-bank is on 2-6 St Mary Street, Newry, BT34 2AA and Newry Helping the Homeless can be found on Facebook.