World medals for Maria and Aoife 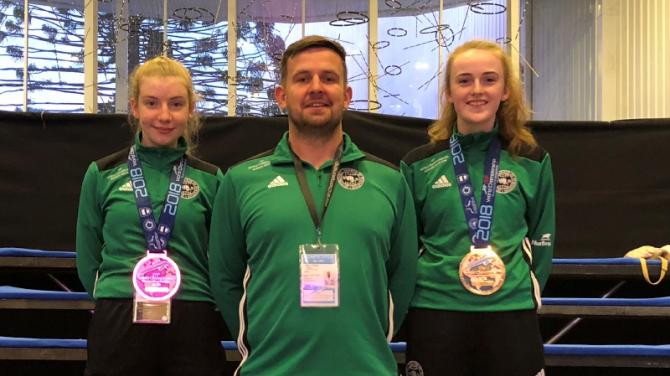 CATHAL Fegan has said that the Tae Kwon Do World Championships last month was an unforgettable experience and insisted he was proud of his club-members Aoife Loye and Maria McGourty.

The World Championships took place in Argentina last month where Fegan and the two girls took on the best in the world in the five-day competition.

McGourty won silver as part of the Irish girls breaking team, which Fegan said was well-deserved, while Loye won bronze in light sparring including a win over the Argentine number one at the quarter-finals. It is a remarkable achievement especially given it was her first Worlds competition as an adult competitor.

Fegan has clubs based in Newry, Warrenpoint and Silverbridge and has coached children and adults to multiple medals at national and international level, but he made the return to fighting and having qualified for the Worlds was a huge achievement.

He lost 3-1 to the Dutch Champion, who went on and secured a bronze medal but said that it was a great occasion, even if the trio didn't get to see much of Buenos Aires.

“Aoife and Maria did brilliantly and fought really well and I am very proud of them,” said Fegan.

“The event itself was held over five days but we spent much of that time waiting because there wasn't a strict timetable as to when we would be competing, which is what we expected.”