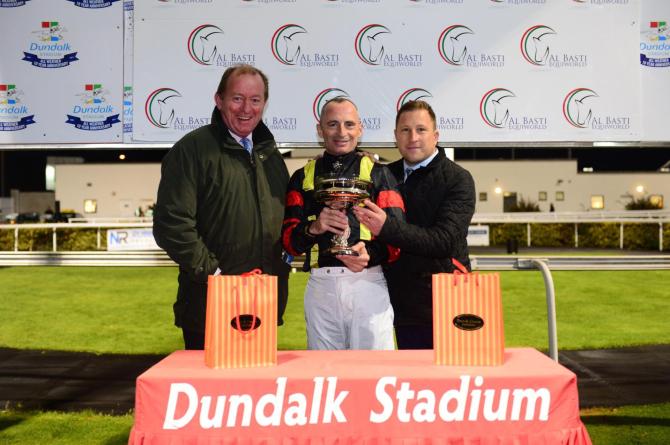 NO-ONE has trained more Dundalk winners than Michael Halford - 181 and counting since 2011 - and he added to that impressive haul by winning four of the eight races at the Stadium on Friday October 12, only narrowly missing out on a fifth.

Three of the four were ridden by Ronan Whelan. First up it was the well-backed 5/4 favourite Playa Del Puente for Hong Kong-based owner Huang Kai Wen in the card’s opening race, the Irish Stallion Farms EBF Median Auction Maiden for colts and geldings.

The second leg of Michael’s four-timer came in division two of the Irishinjuredjockeys.com Handicap when Ahlan Bil Zain (4/1) got up close home under Ben Coen to score in the colours of Richard McNally.

It was so nearly a five-timer for Michael and a double for Ben as Katiymann went down by just a neck to Aussie Valentine (7/2) in the Crowne Plaza Race & Stay Package Handicap. The winning rider was promising seven-pound claimer Gavin Ryan.

Winning trainer Ado McGuinness has had a fine season, including eleven winners in 2018 at Dundalk. For good measure, Aussie Valentine, who Ado bought for “twelve grand”, has now won just short of €70,000 since joining him last October, which represents something of a coup for owners Gary Devlin and Joseph McCrory.

It’s rare that a Dundalk meeting passes by without trainer Joseph O’Brien registering a success and he made it 21 winners at Dundalk in 2018 when Cnoc An Oir (6/1) made an impressive winning debut in the Irish Stallion Farms EBF Fillies’ Median Auction Maiden.

The Joan Brosnan-owned daughter of Born To Sea was ridden to victory by Shane Foley.
As at Dundalk’s September 28th meeting when Hugo Palmer’s Mootasadir won the €63,000 Group 3 Recruit Island Diamond Stakes, tonight’s feature race, the €50,000 Al Basti Equiworld Carlingford Stakes (a Listed Race), found its way back to Newmarket in England.

In this instance it was Global Giant (11/10f) who led the field home, running out an emphatic and well-backed winner in the colours of Dr Johnny Hon for trainer Ed Dunlop and international star jockey Gerald Mosse.

The French rider, who had earlier ridden at Newmarket, said: “Global Giant really liked the track and deserved his win”. It was Gerald’s first success at Dundalk from just his second ride at the venue, his first having come on the same horse in the Diamond Stakes.

The biggest-priced winner of the evening came in the 12-furlong Dundalk Stadium On Facebook Apprentice Handicap when Leaderboard (10/1), ridden by Tom Madden, got the better of the gallant Park Row, who was denied a third-successive victory at Dundalk by three-quarters of a length.

Running for just the second time in a handicap, but for the first time in a handicap at Dundalk, the Charles O’Brien-trained three-year-old gelding looks the type that could follow up this success for the C’est la Vie Syndicate.

Tonight’s headline sponsor, Al Basti Equiworld, are to be hugely applauded for providing free meals for all stable staff at the meeting, and they will be doing the same at Dundalk’s next meeting on Friday 19th October.

The evening’s feature race will be the €63,500 Group 3 Al Basti Equiworld Mercury Stakes, which will mean that Dundalk will have staged a race worth €50,000 or more at each of its last four meetings.