Ladies out of Intermediate Cup 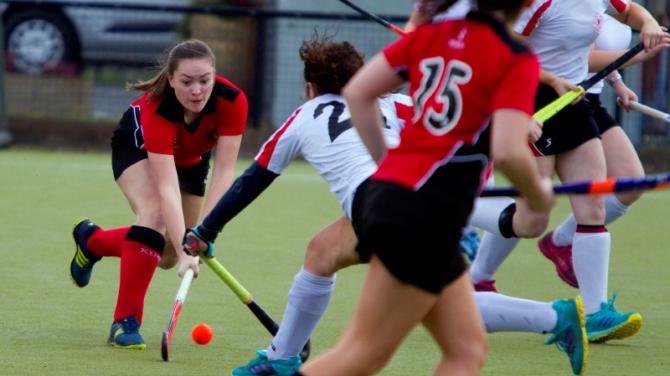 NEWRY Olympic Ladies were knocked out of the Intermediate Cup as South Antrim won 7-2 in Newry on Saturday.

From the first whistle, South Antrim put the pressure on in driving forward with the ball but with the strong defence of Rachael Greer and Laura Simpson they were unable to have a shot on goal.

It wasn't long though before South Antrim went one nil up with the ball unluckily bouncing off right back Rebecca's stick and into the goal.

Newry fought back with some great passing between midfield and the forwards but the Newry ladies were unable to get into South Antrim's circle.

South Antrim were soon awarded a penalty corner and despite Newry's quick run out, the ball found the back of the net, ending the first half as 2-0 to South Antrim.

The whistle went for the second half and Newry put pressure on from the start and were soon awarded their first short corner where the ball was injected out to Shannen Robinson, who took a strike on goal but was rebounded by the goalie and onto Captain Kathryn's stick, who nicely placed the ball into the net. It was now 2-1 to South Antrim.

Newry's defence were put under pressure from South Antrim's forwards with some nice passes. They were able to dribble into the Newry circle and scored their third goal and within minutes scored their fourth.

Newry retaliated and quickly won their second short corner where the ball was injected out to Shannen who slipped the ball back to Captain Kathryn at the right post, who swiped the ball through the goalies legs, securing Newry with their second goal.

Newry ladies just couldn't intercept the swift passing from South Antrim and the end result finished in a 7-2 defeat.

NEWRY hosted North Down on Saturday in their latest league match before a break for the Kirk cup fixtures.

The hosts dominated the opening proceedings and should have been well ahead with 20 minutes gone, however, wastefulness in front of goal made sure the scores were level.

It took a bit of brilliance from John Taylor as he found Colin McKnight with an aerial ball over the defence before Newry took the lead as McKnight coolly slotted the ball past the keeper.

North’ began to grow into the game and were seeing more possession, and winning plenty of short corners but they could not get the equaliser and Newry held out until half time.

The visitors flew out of the traps in the second half and were soon back on level terms as they pounced on Newry’s slow start.

Newry began to find their feet and were creating opportunities up front, one seeing Colin McKnight round the keeper and firing the ball towards goal only to see a North Down defender stop the ball with his foot on the line.

With only five minutes remaining North Down took the lead through a deflected short corner and with very little time left Newry were up against it to get something from the game.

The home side threw everything at it and with two minutes left Colin McKnight fired home a reverse stick shot into the corner of the goal in the second phase of a short corner to bring it back to two all.

There was still time for Newry to create another two great opportunities which fell to Kris Fletcher and Kyle McCombe but both were unable to convert.

NEWRY 2nds produced a commanding second half performance to pick up a well-deserved win in the rain at home on Saturday afternoon.

A double from the returning David Hogg and Gareth Moffett’s third goal of the season proved enough for a 2nds side that spurned numerous chances to win the match more handsomely.

They took the lead inside the first five minutes when veteran Hogg crashed home a shot from a short corner and had other opportunities to extend their lead before Mossley equalised against the run of play.

Having lost the ball just inside their own half, Newry were caught with a swift counter-attack that left a two-on-one at the back and the Mossley forward produced a smart finish past Richard McGivern in the home goal.

The hosts should have regained the lead when a cleverly-worked short corner saw Jonny McWilliams tee up Simon McCafferty six yards out, but the young Mossley keeper came off his line well to deny the striker his goal.

In the second period, Newry took command of the match and pushed Mossley back into their own half for large parts.

They eventually got back in front midway through when Hogg squeezed home his second short corner of the match to make it 2-1.

Whilst other chances came and went to ensure the points would remain in Newry, the 2nds eventually got the third, and ultimately decisive goal 10 minutes from time when Moffett was on hand to force the ball over the line from close range.

The victory sets up a top of the table clash for the 2nds away to Mossley 4ths this Friday night as the Newry outfit aim to keep their strong start to the season going.