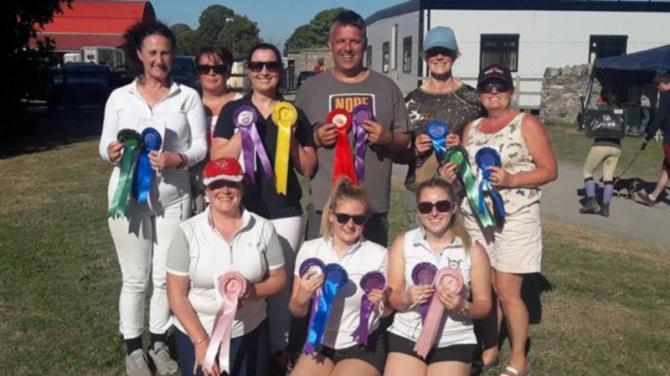 THE rise of recently formed Ard Lú Riding Club, primarily in Mullaghbawn, continues to gather apace after it was named Club of the Year 2017 at the North East Regions Awards.

One of the newest clubs to join the North East Region of the Association of Irish Riding Clubs (AIRC), it has gone from strength to strength at a host of equestrian events since its formation in March last year.

Club Chairperson Dianne Kelly, spoke to The Democrat about the club's 2017 formation and subsequent rise.

She said the club provides fun and encouragement to equestrian enthusiasts, from recreational riders to dedicated competitors.

“The ambition was to have an AIRC affiliated Riding Club serving the Armagh/Louth area. The AIRC is an equestrian sports organisation with around 3,400 members registered to approximately 130 affiliated clubs; each club belongs to one of eight regions within the Association,” said Dianne.

“Within the AIRC structure, each rider is graded in accordance with their ability and expertise to standardise competition standards, with the objective of placing as many riders as possible on an equal footing.

“Taking its name from the area it serves of Armagh and Louth, Ard Lú Riding Club was officially launched on March 1, 2017, and membership continues to grow,” continued Dianne.

When the club started, a big emphasis was put into accruing top-class trainers across multiple equestrian disciplines, something she believes the club committee have achieved.

“Since then, Ard Lú Riding Club has been a very active and busy riding club, with members taking part at club events including weekly training in flat-work and jumping, hacks, social outings and shows, members also have has success when representing the club at inter-club and national events,” said Dianne.

“The club is very fortunate to have some fantastic trainers including, Micky McCann, Michael Boyd and Grainne Bennett.”

Based primarily at Bennett’s Equestrian in Mullaghbawn, Ard Lú are set to host a leg of the 2019 Winter Showjumping League in the Ravensdale Equestrian Centre in February.

Dianne said that the recent award was a well-deserved recognition of club members’ continued hard-work to get Ard Lú off the ground.

“The enthusiasm and determination of the members to make the club a success was rewarded when at the North East Regions Awards night Ard Lú Riding Club scoped the prestigious award of Club of the Year 2017,” Dianne said.

“This was a huge accolade for such a new club to be awarded with, and was made all the more special as the nominations were based on votes received from members across the region.”

The 2018 AGM will be held on Wednesday, November 14, at 8pm in the Riverside Bar, Mullaghbawn.

Everyone is welcome to attend. Membership for 2019 will be open to anyone aged 17 or older.

Check out the club's Facebook page or email ardlu@airc.ie for more information.