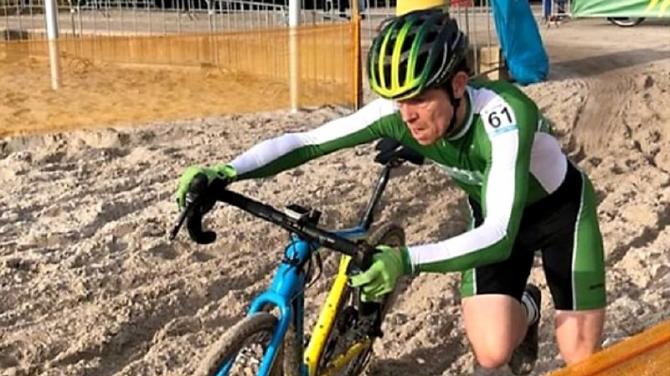 Both M45 and M50 races were held on Saturday. The M45-49 and M50-54 were two of the largest races of the weekend and the guys were under the watchful eye of coach Barry Monaghan who helped and supported the duo.

First up was Des Woods. The gridding (starting positions) are all a lottery and Des started further down the grid in 48th position.

The course was extremely technical and made even tougher with large sections of the course having a sand surface.

Des quickly moved through the course, picking off riders and finished in a fantastic 25th position overall.

Meanwhile Alan Bingham was gridded similarly with a 48th spot on the starting line and again he speedily worked his way through the course to finish up also 25th overall.

This was a massive experience for the guys, mixing it up with professionals and riders who are ranked at the top of their game.

Des and Alan did Newry Wheelers and their province extremely proud.

These races were excellent preparation for the forthcoming Ulster Championships, scheduled for Dungannon at the weekend while the Nationals will take place in Cork in a few months.

A special mention for Brendan Doherty, VC Glendale, and Darnell Moore, Caldwell Cycles, who also travelled with the guys over the weekend and who competed at the M50 and U23 races respectfully.

Brendan had a super result, taking12th overall in the M50. Both riders did their clubs proud.

It was a well organised event, hosted by Navan Road Club and it was another good technical course on offer.

Drew finished just outside the top ten in his race but was first M40 (unplaced).

This was good preparation for the Ulster Cyclo-Cross Championships next week.