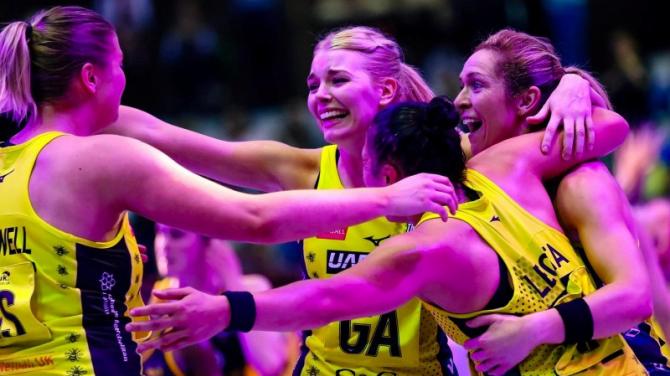 BESSBROOK ace Caroline O'Hanlon has added another special chapter to her illustrious sporting story after helping Manchester Thunder come back from the dead to be crowned netball's British SuperLeague champions.

Thunder produced this month's latest sporting great escape to win 57-52 after outscoring champions Wasps Netball 18-7 in a sensational last quarter at a bouncing Copper Box in London on Saturday evening.

Armagh gaelic ace O'Hanlon had already made history by becoming the first Irishwoman to play in netball's northern hemisphere showpiece but by the last break it looked like a winner's medal might be beyond her.

A first Thunder title triumph for five years seemed the stuff of fiction when the underdogs went into that final 15 minutes trailing a powerful Wasps side by six goals but their miraculous comeback will live long in many memories.

Showing fantastic character and nerves of steel, Thunder wrote their own fairytale ending against overwhelming odds by turning the SuperLeague grand final on its head with scintillating attacks and wonderful defence.

That they had to do so in spite of losing shooting star Joyce Mvula in that incredible last quarter made Thunder's eventual victory by an almost comfortable five-goal margin all the more remarkable.

When Malawi's Mvula twisted her knee badly in the seventh minute of the final period, it felt like Thunder's brave rally in closing the gap to two goals might be stopped in its tracks.

However, supersub Ellie Cardwell came on to score with her first touch and the English international rattled in an astonishing 10 goals from 10 shots in less than nine minutes before finally missing in the closing seconds.

But by then it didn't matter with Thunder a barely believable five goals clear and the sting taken out of a stunned Wasps side which had been tipped to complete three title triumphs on the trot.

Instead it was Thunder who were celebrating a hat-trick of their own, with a third victory over Wasps this season having inflicted two of only three defeats the reigning champions suffered during 18 rounds of regular league games.

A run of three defeats in four fixtures had left Thunder in runners-up place but they came into the decider battle-hardened and with that April wobble behind them after edging an epic semi-final with Team Bath 57-54 the previous Saturday.

Having held her own against English skipper Serena Guthrie seven days earlier, O'Hanlon had no fears facing England's most capped player of all-time Jade Clarke in the decider and again the 34-year-old proved her world-class centre credentials and came out on the winning side.

It was a wonderful final of fluctuating fortunes, played out in front of a capacity crowd of 7500, who created a brilliant atmosphere at the London Olympics venue, and live Sky Sports television audience.

The alarm bells were ringing early on for the Manchester side as Wasps scored the final's first four goals, duly led 17-12 at the end of the opening period and even went seven up at one stage.

From there though, Thunder really began to roll after an O'Hanlon intercept, were actually ahead for the first time in the match less than nine minutes later and went into half-time 29-27 up.

However they appeared down and almost out when Wasps pulled clear late in the third period only to defy the odds with an inspired performance full of fight and netballing brilliance in that last quarter.

"It was a real roller-coaster of a final and we were so far behind at the last break it would have been easy to think it was just gone for us, but there's great resilience in this team," reflected O'Hanlon.

"We knew we had the attack to break them down and have real confidence in each other. Losing Joyce was a big blow but Ellie showed our squad depth with fantastic shooting and keeping Wasps to just seven goals in the last quarter was incredible defending from us.

"It was an amazing match played in an incredible atmosphere and to win my first SuperLeague final from such an unpromising position definitely all adds up to this being a huge highlight of my sporting career," said O'Hanlon.