O'Hanlon's Thunder on a roll 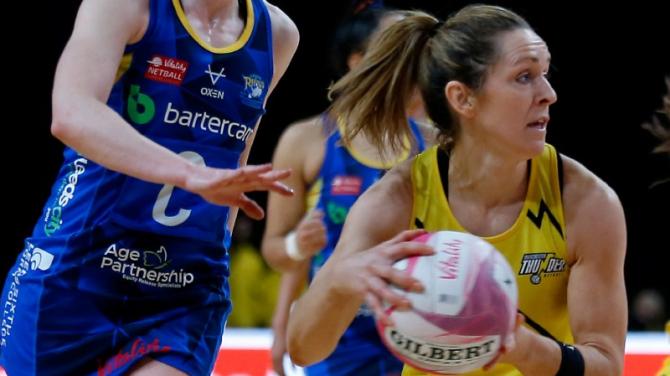 NORTHERN Ireland netball captain Caroline O’Hanlon was at the heart of the action as Manchester Thunder smashed the all-time record for goals in a British SuperLeague game last Saturday night, writes Richard Bullick.

Having hit the 80-mark for the first time against Surrey Storm on Easter Sunday, table toppers Thunder defeated Wasps 88-57 in Coventry with world-class centre O’Hanlon from Bessbrook pulling the strings superbly.

Thunder marked head coach Karen Greig’s 100th SuperLeague game in charge in stunning style by breaking the previous record of 86 goals set by Storm against the now defunct Team Northumbria a number of years ago.

In doing so they took their tally in the current campaign past 1000 goals, with England’s Ellie Cardwell netting 48 times and Joyce Mvula weighing in with 38 in what was also the Malawi legend’s 100th SuperLeague game.

Although Wasps, who Thunder defeated in an epic SuperLeague Grand Final in 2019, have had a disappointing season by their standards, they fought hard in a bid to stop the visitors making it 15 consecutive victories this year.

Thunder went with her strongest side from the off with the exception of South Africa defender Shadine van der Merwe, but even though gaffer Greig ran her bench in the later stages there was no respite for Wasps, who were put to the sword right to the end.

It had been a special Easter for O’Hanlon and Thunder as they extended their winning streak with a weekend double and booked their place in the top four play-offs with six rounds of fixtures to spare.

All 11 SuperLeague sides came together at Birmingham’s Resorts World Arena for a feast of netball with a total of 10 matches over two days and there were a fair few twists and turns across the board, but unbeaten table toppers Thunder marched on.

Coming into the Easter extravaganza with 12 wins from 12 in the current campaign, there was no hint of unlucky 13 for Thunder as they easily saw off one of O’Hanlon’s former sides Strathclyde Sirens 73-51 on day one before producing their Sunday best against Storm.

It was a tough afternoon for the Surrey side and their two Northern Ireland internationals Niamh Cooper and Emma Magee as 2019 SuperLeague champions Thunder showed why they are being hotly tipped to reclaim the title this June by winning 80-50.

Having given first choice centre O’Hanlon a break against struggling Severn Stars the previous Saturday, Greig used the opening game in Birmingham to rotate Mvula and England’s likely new captain Nat Metcalf before going with her strongest side on Sunday.

So Mvula returned to partner England ace Cardwell up front with O’Hanlon flanked by wing attack Metcalf and Thunder skipper Laura Malcolm in mid-court and van der Merwe paired with evergreen goalkeeper Kerry Almond at the back.

That star-studded combo has been branded the ‘magnificent seven’ and they were ruthless in laying the foundations for a convincing victory against a Storm team who had only lost 57-54 to champions Loughborough Lightning the day before.

Dual sports star O’Hanlon had arrived in Birmingham on the back of a disappointing defeat for her Armagh gaelic team in the previous Sunday’s NFL Division Two final, when the triple All Star was a shock omission from the starting side against Kerry in Croke Park.

O’Hanlon, whose Thunder team-mates Almond and van der Merwe had flown to Dublin to watch her in action for Armagh, played with great energy, athleticism and creativity at wing attack as Thunder raced into an early 14-3 lead against Sirens and never looked back.

The evergreen 37-year-old warmed up for Thunder’s match against old rivals Team Bath yesterday (Mon) evening by returning to her familiar orange No 9 jersey and scoring four points in Armagh’s Ulster semi-final victory over Monaghan in Clones on Saturday.

Now in her 21st consecutive season of county football, O’Hanlon remains fully committed to the Orchard cause and the good news for Armagh followers is that the Carrickcruppen player will be available for this month’s Ulster final against Donegal or Cavan.

An influential figure when Thunder were crowned champions in 2019, O’Hanlon will also be hoping to clinch a second SuperLeague title the first weekend of June ahead of captaining Northern Ireland’s netballers at this summer’s Commonwealth Games in Birmingham.

This Sunday, the NI Warriors skipper could come up against another dual star, Antrim’s Michelle Magee, when Thunder take on Rhinos in netball’s ‘War of the Roses’ at the First Direct Arena in Leeds (4pm, live on Sky Sports Youtube).

The imposing Magee, who has started the last nine SuperLeague games for Rhinos, mostly at wing defence, will line out for the Saffrons the following Saturday in the Ulster Junior final against a Fermanagh team managed by former Armagh gaffer James Daly.