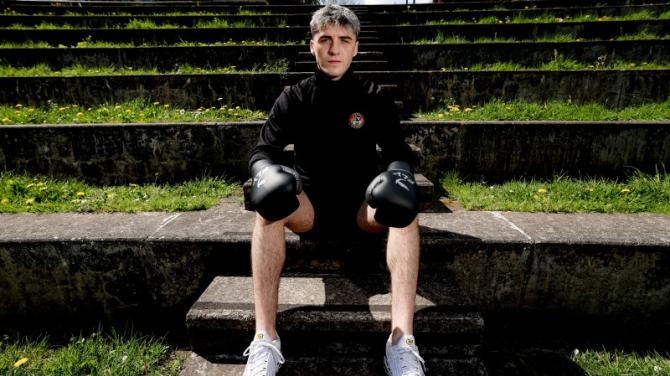 JAKE Tucker is targeting a gold medal at this summers Commonwealth Games after being selected for the NI boxing squad.

It was a strange and disappointing decision that Jake's brother Kane did not make the team, despite being considered a potential medallist in Birmingham, but other challenges await the older Tucker.

For Jake though, he wants to continue working hard and be prepared to box on the big stage and bring home a medal.

“Obviously I am happy to be selected for the Games but now I am determined to push on and to try and take home the gold medal,” Tucker said.

“I am definitely there to go all the way.”

The 20-year-old is no strangers to success, his nine Irish titles and two Ulster Elites are among the many accolades we have seen Jake grow up winning.

A former St Joseph's High School pupil and former boxer at Newry Bosco, he boxes under Harry Hawkins at the Emerald Club in Belfast, but is currently training with the High Performance team and Tucker is feeling in good shape.

“We were in Italy last week and that is when we started our camp. We still have almost another three months before the Games, so we have a long camp ahead of us,” said Tucker.

“I can even feel myself I have improved by ten times in Italy. So by the end of the camp I could be flying for the Commonwealth Games.

“I went over with very little sparing or preparation and come the end of the camp I was flying and I was only there for 12 days.

“We were sparring with American number ones, Italian number ones, I was sparing European champions, world number twos, number ones and I was doing very well against them. All the sparring was close, nobody was taking any liberties and not only for me, but that is what it was like for the whole team.”

“It just shows how much potential we all have for medals.”

Boxing is Northern Ireland’s most successful sport at the Commonwealths with 61 medals, including 13 golds, 19 silvers and 29 bronze medal bronze.

Ulster Head Coach, John Conlan, says: “It’s good to get the squad in early enough to get them training together and get a solid platform of training going. The squad will train with the National team, will attend a sparring camp in Italy, take part in the Eindhoven Box Cup which is good for building international experience. The preparation will finish with a massive international training camp in Belfast, with teams from Australia, India, New Zealand, GB, Canada, and many of the smaller nations.”

Tucker's training routine is a morning weigh in, then sometimes onto the track, followed by a boxing session – which could be sparring, bags, or pads. The young boxer is loving life and enjoys being part of a team.

“I love it, we have a great team and a great bunch of lads. It is easier when you have someone to talk to and have a bit of craic with whenever you are training,” said Tucker.

“It is good to have a few local people and we have a few more camps, so we will be like a big family before the end.

“To be fair it is the best of everything and we have the best strength and conditioning coaches, the best physio, the best nutritionists, we have got everything we need. There is nothing we don't have, we have a physiologist and stuff to keep the head space right.

Jake says he feels for his brother and admits his omission can add fuel to his flame.

“It is disappointing and he is obviously very disappointed as well,” Jake said.

“I think he knows that is the way boxing goes sometimes and there are plenty more competitions ahead of him.

“I feel that I have a strong enough drive, I suppose it does drive me a bit more the fact he didn't get picked and stuff. I definitely want to take home a medal and hopefully gold.”

One thing the Tucker brothers don't need to worry about is meals as they have teamed up with a local supplier.

“They are brilliant and delicious and they have all the nutrients I need to stay fit and keep my body right. They sponsor me and my brother and it is brilliant, it is so handy because when we come home and dinner is there ready for us. It helps us out a lot.”

The Commonwealth Games take place in Birmingham from July 28 to August 8, which Tucker expects will see plenty of Irish fans and he is enjoying training and in a good place and as Jake told me: “A happy fighter is a dangerous fighter.”

Broadhurst is an Irish title holder and a European gold medal winner, she joined St Bronagh's Rostrevor last March, where her dad coaches. Amy is currently in Turkey for the World Championships.

Mullaghbawn's Eugene McKeever is another boxer with great potential, a national title winner many times, - who can forget that knock-out victorty in the Ulster Hall back in 2019.

It bodes well for the NI team and it is great news for the Newry area and local boxing community.