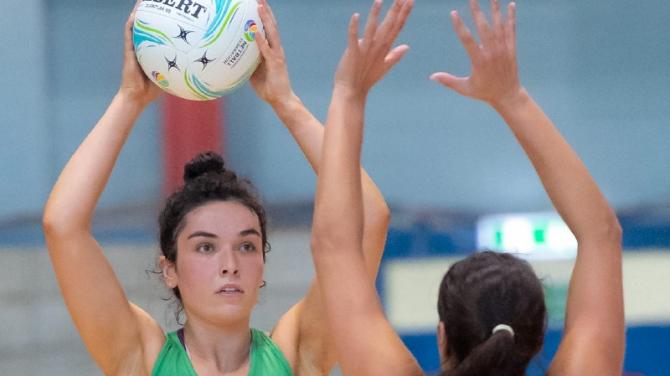 Being selected for the first major tournament of her career is a dream come true for the 22-year-old from Cullyhanna and going to Birmingham 2022 under her hero O’Hanlon’s captaincy will make the experience all the more special.

A star-struck Keenan watched O’Hanlon compete at the Glasgow 2014 Commonwealth Games as a 14-year-old on a school trip to Scotland with Newry’s Sacred Heart Grammar and now she will be the Bessbrook superstar’s team-mate this time round!

Keenan was Head Girl at Sacred Heart, preparing to sit her A-levels, when O’Hanlon was Team NI’s official flag-bearer at the opening ceremony for the Gold Coast 2018 Commonwealth Games and is set to graduate in Finance from Queen’s early next month.

First capped as a teenager at the European Championships in September 2019 before the pandemic caused a huge hiatus, the hard-working Keenan has combined breaking through in international netball with being Cullyhanna ladies gaelic captain.

She made her first start for Northern Ireland at senior level last August in a friendly against their Republic counterparts and captained the Braves to the final of the inaugural NI Super Cup tournament in December.

The Braves lost to a Samurais side which had O’Hanlon as player-coach but Keenan had the consolation of making the Super Cup All Stars line-up and the fact she was the youngest of the four team captains by more than seven years reflected how well she is thought of.

A versatile player who can also line out at goal attack, Keenan is the only one of the four mid-courters in the Warriors squad for Birmingham who doesn’t play professionally in the British SuperLeague and the other three are very experienced campaigners.

Especially considering how coronavirus shut down domestic netball in NI for so long, Keenan has done well to get the nod ahead of Evelyn McCagherty, who came through the London Pulse Academy and has been playing for Surrey Storm Under 21s this season.

With just 12 players in the squad and an intense schedule of fixtures, Keenan can now look forward to getting game-time against some of the best teams in the world this summer and the Northern Ireland skipper says she has earned her chance to shine on the big stage.

“Frances is a great talent and a great example to young players in Northern Ireland.  She has worked her socks off and didn’t let her head drop during the pandemic which was a difficult period with no club netball and so much uncertainty,” saidO’Hanlon.

“She has put in the hard work with her strength and conditioning and at all the Warriors training sessions and fully deserves selection in this squad. I know how highly Elaine (Rice) rates her so it’s no surprise she has got the nod in spite of fierce competition for places.

“I’m excited for Frances that she’s going to be part of an incredible Commonwealth Games experience and it’s a pleasure to have her in the squad.  Her attitude is so good and she’s like a sponge, always wanting to soak up any knowledge which will help her get better.

“It’s great that her hard work has paid off in terms of squad selection and I know she will keep pushing over the next few weeks with the ambition to do well at the tournament.  Hopefully she’ll get enough court-time to show how good she is.

“We will be playing some outstanding teams in Birmingham with the last World Cup winners New Zealand and defending Commonwealth champions England in our group along with two strong African sides, Malawi and Uganda, plus Trinidad and Tobago.

“It’s nice to have another player from my own part of the world in the squad, a fellow old girl of Sacred Heart, and I’ve no doubt that our former school coach Mrs (Siobhan) McCaffery, to whom we owe so much, will be proud and delighted to see us both on this stage.”

Only five of this squad have previous Commonwealth Games experience, including O’Hanlon’s experienced vice-captain Fionnuala Toner and current Leeds Rhinos star Michelle Magee, who was still a schoolgirl when she featured Down Under in April 2018.

Her elder sister Emma Magee, who plays for Surrey Storm, and another English-based shooter, Ciara Crosbie, were part of Northern Ireland’s 2019 World Cup squad, at which the former finished as leading goal-scorer for the Warriors.

That leaves Keenan as one of five players selected for their first major tournament along with lead shooter Jenna Bowman, back-up circle defenders Olivia McDonald and Maria McCann and uncapped forward Georgie McGrath.

Having impressed in that NI Super Cup competition, McGrath has pushed through to take the last place up front at the expense of her Kingsway clubmate Dearbhla Coleman, with Oldham ace Crosbie being brought as a goal shooter rather than goal attack.

Lurgan girl Coleman gave up Armagh gaelic this season to focus on netball so it was ironic that the disappointing news she had missed out on Commonwealths selection came on the evening of the Orchard’s dramatic victory over Donegal in the Ulster ladies football final.

Although the squad wasn’t made public until last week by the NI Commonwealth Games Council, the players were informed of their fate by email several Sundays ago and the anxiously-awaited message brought great joy for Belfast Ladies star Keenan.

“I was doing my university finals just before the squad for the Commonwealths was due to be selected so it was such an important period, but the good thing of being busy was that I hadn’t time to over-think things,” reflects Frances.

“We had our last squad session that Sunday morning and knew we would be notified by email that evening as to who had made the cut.  Caroline was playing for Armagh in the Ulster final and watching that amazing match kept my mind off it a bit.

“At that stage, you’ve done everything you can and it’s out of your hands.  It was slightly surreal reading the message when it came but obviously very exciting news and I’m really looking forward to the new few weeks and preparing for the challenge ahead.

“The wheel has come full circle since watching Caroline eight years ago in Glasgow, which was a first chance for me to see elite level netball and realise just how big this sport is.  That trip boosted my love for netball and made me want to keep progressing in it.

“Caroline is such an inspirational role model, a world-class player who has given outstanding service in the green dress and done so much to raise the sport’s profile here.  It was brilliant watching her winning the SuperLeague again with Thunder last weekend.

“She’s hugely experienced, still as hungry as ever and sets the standards for everyone else.  I’m grateful for all the encouragement she has given me and now getting the opportunity to go to the Commonwealth Games with her is a complete privilege,” enthuses Keenan.