Time to take plunge against best 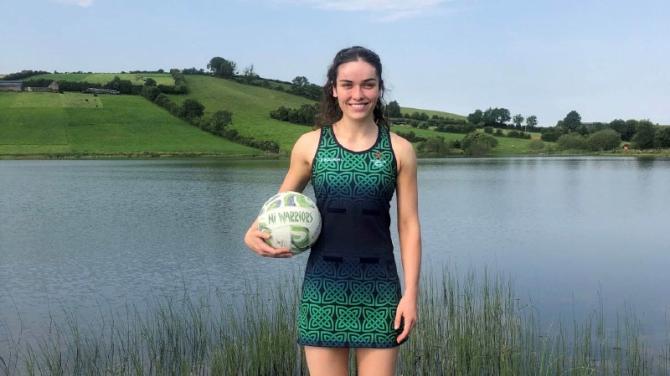 MY WARRIOR WEEK: local Team NI netballer Frances Keenan writes for the Newry Democrat ahead of the Commonwealth Games

BY the time you’re reading this, we should have settled into the athlete village in Birmingham and be just three sleeps at most from facing world champions New Zealand in our first fixture at the Commonwealth Games.

Ironically, New Zealand were the opposition too in our opening game at the 2017 Netball World Youth Cup in Botswana, the nearest thing I’ll have experienced to this in terms of the intense schedule and facing a real mix of opponents from disparate parts of the globe.

On that occasion, we played no fewer than seven matches in eight days, starting with four group games back-to-back. At the Commonwealths, we will play six times in eight days and be up against fully professional sides in two of our first three fixtures.

This is a first major tournament with the Warriors for five of us, but it’s a third Commonwealth Games for my three fellow mid-courters in this squad so their experience should prove very valuable and especially our captain Caroline O’Hanlon.

I noticed a quote from one of the other newcomers in the squad, Jenna Bowman, saying that Caroline had told her the Commonwealths would be ‘a real roller-coaster of emotion, but the best roller-coaster you will ever step on’ and that makes sense.

The netball tournament itself features the top 11 teams in the world rankings so will be a real feast of our sport but at Birmingham 2022 it will be only one element of a massive multi-sports event second only to the Olympics.

Official figures suggest that there will be more than 5000 competitors representing 72 countries taking part in 280 categories across 20 different sports over the 12-day duration, so that certainly captures a sense of the scale!

Our own netball likely finishes several days before the closing ceremony so there may be an opportunity then to see some other sports and cheer on a few wider Team NI competitors who are in action towards the end.

They talk about the dining hall in the village at these events being a great big melting pot of people from so many nations and sports, so we’re bound to spot a few famous faces, but it’s unlikely anyone will rival Caroline’s legendary selfie collection from Glasgow 2014!

Among those she nailed down was Usain Bolt, who actually came into the arena when we were there watching the netball back then as star-struck 14-year-old schoolgirls on an unforgettable trip with Sacred Heart.

Although I haven’t competed before obviously, you could say, somewhat tongue in cheek, that this is the second time I’ve headed over to a Commonwealth Games in Britain and I’m genuinely indebted to Mrs Siobhan McCaffery for both of those.

As our enthusiastic school coach, she organised that trip for us eight years ago which really opened my eyes for the first time to just how big netball is at the elite level because, coming from my part of the world, I really had no notion in advance.

What I was really looking forward to beforehand was playing some matches ourselves over in Scotland.  They weren’t official fixtures as such, or part of a competition, but it was the first time I had travelled out of the country to play sport and really exciting at that age.

Whether we were decent at netball because of Mrs McCaffery’s coaching, or it was a case of her having hand-picked our opposition shrewdly, or a bit of both, but we went well in our three games, one against a school side and two against youth teams.

But then attending the Commonwealth Games as spectators was exciting too, and seeing netball being played at that amazing standard further fuelled my love for the sport and made me want to play it even more myself.

We watched the Northern Ireland netball team making their Games debut against Malawi and get their first win against St Lucia, and also saw some of the top teams – New Zealand, Jamaica and Australia – in action.

Obviously seeing someone who had attended the same school, and who we’d heard so much about, starring on the NI team in Glasgow, was inspirational, though following in her footsteps might have seemed like a fairly far-fetched pipe-dream at that stage.

So being part of the Warriors squad with the same Caroline O’Hanlon eight years on is pinch-myself stuff and we’re both delighted that Mrs McCaffery is coming over for our Uganda game next week.  It will be special catching up with her here.

We owe her so much for starting us on this rewarding journey and the great thing about these Commonwealth Games being on our doorstep relatively speaking is that it’s less difficult for family, friends and supporters to be there than say Gold Coast four years ago.

When we met up at Belfast International Airport at 6.30am last Thursday for the short hop to Manchester for our pre-tournament training camp, I was embarking upon my most important netball trip to date but definitely not the longest journey of my career so far.

That was when we went to Africa for that World Youth Cup which took place in Gabarone, Botswana five years ago.  I’d never travelled that far for either holidays or sport before so the location added to a really exciting experience.

Getting exposure to different styles of netball than what I had been used to and playing against some of the top countries in the world like New Zealand was such a good developmental experience and definitely a steep learning curve at the time.

The tournament outcome was disappointing in that we finished 16th after defeats to New Zealand, Samoa, Scotland, Zimbabwe, Trinidad and Tobago, and Barbados with our only victory coming against Sri Lanka.

However, losing our captain Emma Magee to a bad concussion at the start of the tournament was a big blow for us but thankfully she bounced back to lead the team to bronze medals at the European U21 Championships in Antrim Forum 15 months later.

Myself and the two Magee siblings are the three players from that trip to Botswana who are involved in Birmingham 2022 and I’ve spent a fair bit of time away with Emma’s younger sister Michelle on international duty over the years.

We started together with the Under 17s in Gibraltar in the spring of 2016, so it was nostalgic going back there with the senior squad last autumn, although she’s already a very established star at this stage and this is her third major tournament with the Warriors.

She’s actually a couple of months younger than me but was selected for the 2018 Gold Coast Commonwealths while we were still at our respective schools, played in the next year’s World Cup and now has a couple of SuperLeague seasons under her belt!

Michelle captained that NI Under 17 team on our first trip and she was always a stand-out player and definitely a real leader on court so it hasn’t been surprising to see her shining in the senior squad from a very young age and now for Leeds Rhinos on Sky Sports!

Emma Magee grabbed her chance with both hands as a 21-year-old at the last World Cup, Michelle embraced being thrown in at the deep end at her first Commonwealths when just aged 18 and now they’re experienced, important players coming into this tournament.

It will undoubtedly be a baptism of fire for a few of us but we’re in a very supportive environment and there’s a great spirit in the Warriors squad. We’re excited about the challenge ahead and what should be an incredible experience.