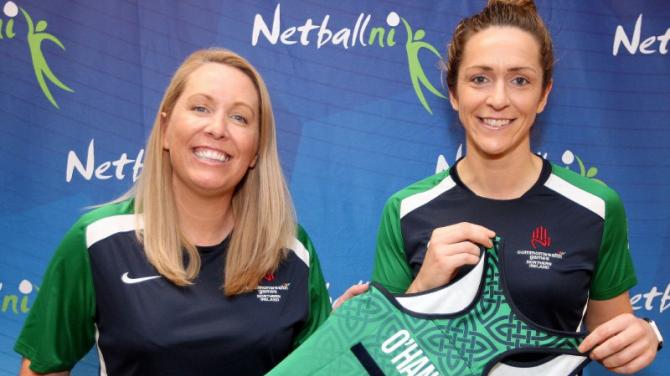 THERE will be a sense of déjà vu for captain Caroline O’Hanlon when she leads her Northern Ireland netball team out against New Zealand in their first fixture at the Commonwealth Games in Birmingham this Friday (6pm, BBC), writes Richard Bullick.

This is the third major tournament at which the brilliant Bessbrook sportswoman has skippered the girls in green and, on all three occasions, they have faced the toughest of opening games against the reigning world champions.

At the Gold Coast 2018 Commonwealth Games, minnows Northern Ireland were designated lambs to the slaughter against Australia, a fully professional side playing at home in front of a capacity crowd and a prime-time television audience, and duly lost 94-26.

The NI Warriors were paired with the Aussie Diamonds again in their first match at the following year’s World Cup in Liverpool, being beaten 88-24 on a day that the legendary O’Hanlon had to be taken off after alarmingly landing on her head.

Australia lost their respective crowns in both those tournaments, with England claiming historic Commonwealth Games gold in dramatic fashion against the hosts, and New Zealand defeating their neighbours in the 2019 World Cup final.

With two of their first three matches in Birmingham being against the NZ Silver Ferns and English Roses (Monday, 6pm), this will be a baptism of fire for a Warriors squad containing five major tournament newcomers including 22-year-old Frances Keenan from Cullyhanna.

However, O’Hanlon is happy with how the fixtures fall, for the fact Northern Ireland’s most winnable battles on paper take place later in the group phase should be beneficial for a team that typically lacks competitive opportunities between tournaments.

It was a similar scenario at Glasgow 2014, where Northern Ireland learned from defeats to formidable Malawi, Jamaica and New Zealand before beating St Lucia and hosts Scotland and then finishing a superb seventh by walloping Wales 58-36 in their placings game.

The same thing happened at Gold Coast 2018, where early losses to Australia, South Africa and Jamaica were followed by victories over Barbados and Fiji which ensured another top eight placing in spite of finishing with a very creditable narrow defeat against Malawi.

Although they will have a real rattle at Malawi this Sunday (12noon) after agonising near misses against them at the last two major tournaments, Northern Ireland’s last two group games in Birmingham again appear the best bet for wins.

But Uganda, who finished sixth as a surprise package at Gold Coast, and Trinidad & Tobago, who condemned Northern Ireland to 10th place at the last World Cup, look like tougher opponents than the likes of St Lucia, Barbados or Fiji at previous Commonwealths.

As the lowest-ranked team in their Birmingham group, O’Hanlon’s side will need to live up to their Warriors moniker if they are to upset the odds and avoid a play-off for 11th next Friday which would likely be against Barbados.

The girls in green have repeatedly punched above their weight on the global stage since Elaine Rice came in for the first of her four spells at the helm in the late noughties, including reaching the World Cup quarter-finals for the first time at Singapore 2011.

Considering netball is very much a Commonwealths sport, with the world’s top 10 nations always at the Games, finishing seven and eighth at Glasgow and Gold Coast respectively were great achievements by Northern Ireland which will be challenging to emulate.

Northern Ireland qualified for a third consecutive Commonwealths by virtue of being in the top 12 of the world rankings at the official cut-off date of the end of January this year, but causing upsets at the tournament will be far from easy.

You can’t metaphorically ‘park the bus’ in netball and the sheer volume of scoring makes major upsets much harder to achieve than some sports such as football or hockey, in which outsiders Ireland shocked everybody by reaching the 2018 World Cup final.

So the girls in green won’t be emulating the Ireland rugby boys earlier in the month by beating New Zealand, but avid Manchester United fan O’Hanlon will want her Warriors to summon the ‘spirit of Liverpool’ against the Silver Ferns.

That isn’t a reference to the Anfield footballers but how Northern Ireland impressively put it up to New Zealand for periods during their 2019 World Cup clash which the Kiwi women won 77-28, not least when some of the younger Warriors were on court.

Rice will probably use Friday’s fixture to give her entire squad of 12 a run-out, which would mean a first taste of Commonwealth Games action for seven players including Keenan, albeit Emma Magee and Ciara Crosbie have both featured at a World Cup.

O’Hanlon, who won the second title of her career with Manchester Thunder last month, heads a five-strong British SuperLeague contingent completed by Storm forward Emma Magee and younger sister Michelle, who has nailed down a starting spot for Leeds Rhinos.

After pulling the strings for a dominant Thunder team, being back in the green dress will be a very different experience for O’Hanlon, Northern Ireland’s most capped player of all time who is set for a sixth major tournament stretching back to the 2003 World Cup in Jamaica.

If Northern Ireland don’t come through October’s European qualifying tournament for next summer’s World Cup in South Africa, this could conceivably be O’Hanlon’s last hurrah on the big stage as she turns 38 the day of the closing ceremony in Birmingham on August 8.

The disappointing Orchard defeat to Kerry earlier in the month means the prospect of a direct clash for the Armagh gaelic great between the All Ireland final and Northern Ireland’s Malawi match hasn’t materialised after all so speculation about helicopters can cease!

World-class centre O’Hanlon will come up against some familiar faces in Birmingham, not least in the England game, as the Roses squad is captained by Nat Metcalf and includes two more Thunder stars in franchise skipper Laura Malcolm and shooter Ellie Cardwell.

Joyce Mvula, who was O’Hanlon’s official flag-bearing counterpart at the opening ceremony of Gold Coast 2018, will be spearheading the attack for Malawi while Uganda can call upon Emma Magee’s Storm shooting partner Proscovia Peace up front.

Uganda captain Peace topped the SuperLeague scoring chart this year with a phenomenal 853 goals while, in spite of a spell out injured, her 6’7” compatriot Mary Cholhok came fifth in netting 633 times for Loughborough Lightning, who Thunder defeated in the Grand Final.

Mvula was second in the table with 774 goals and the Warriors will need to find a way of collectively combating such scoring threats if they are to emulate those top eight placings at the last two Commonwealth Games.

Malawi are longer established as a major international force than Uganda, repeatedly placing well at major tournaments, but those SuperLeague stars are huge heroes in both African countries, while there is also a strong netball culture in the Caribbean.

Northern Ireland have had a few brutal battles with Trinidad over the years, the African nations are also typically physical sides while New Zealand and England both benefit from being full-time professionals, so the Warriors will certainly have to fight hard.

There are some compelling parallels with their women’s soccer counterparts at the recent Euros where Northern Ireland were also the lowest-ranked team in their group, but at least some of these netballers can call upon previous experience of the big stage.

Rice is the most successful coach in Northern Ireland netball history and this team doesn’t lack leaders with O’Hanlon and Toner, who have been in their roles for six years, backed up by the ferociously combative Cooper and the impressively mature Michelle Magee.

Six of Rice’s strongest starting seven have considerable SuperLeague experience, leaving the goal shooter bib to be fought for by Jenna Bowman, the third sibling to play up front for Northern Ireland at a Commonwealth Games, and Crosbie.

Crosbie helped Oldham win the English Premier League title this season and those two will be supplemented by goal attack Emma Magee, who was Northern Ireland’s leading scorer at the 2019 World Cup having come into that tournament as an unproven rookie.

Shooting percentages could be key to whether the Warriors can finish above their ranking of 11th and even maintain their remarkable record of finishing in the top eight at each Commonwealth Games.  All matches will be broadcast by the BBC, either on television or online.