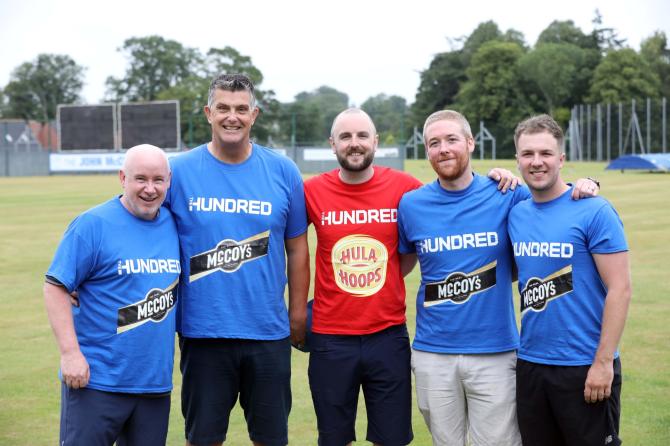 Cricket clubs across Northern Ireland could be running away with a £1,000 cash prize thanks to a campaign by KP Snacks, Official Team Partner of ‘The Hundred’ cricket competition.

‘The Hundred’ is an action-packed televised 100-ball cricket tournament featuring world-class players and massive names from around the world, with eight new women's and men's teams competing over five weeks during the summer.

To mark KP Snacks’ partnership with this exciting event, the company is reaching out to local communities and encouraging more people to get active through cricket this summer.

As part of this initiative, in an exclusive NI-only competition, KP Snacks (NI) is offering local cricket clubs, at all levels, the chance to win £1000 towards much needed cricket gear and equipment.

To be in with a chance of winning, clubs are asked to visit KP Snacks NI on Facebook or email kpsnacksni@duffyrafferty.com and explain why they deserve to win this money and what they want to spend it on – making sure to include contact details and cricket club address.  Closing date is September 5th, 2022, with the winner to be announced by September 12th.

Ricky Watts, Business Account Manager (Northern Ireland) for KP Snacks Ltd, said: “Our partnership with The Hundred is underlined by our passion to build interest and get people active through cricket, which in turn can have a positive mental and physical impact on those who play.

“As part of our partnership with The Hundred, we are also delighted to offer local cricket clubs in Northern Ireland the exclusive chance to win £1000 to help buy them equipment or whatever they need. We’re living in difficult times right now and we know that this would be a real boost for any local club out there, no matter what level they play at.”

Earlier this year, KP Snacks launched a national on-pack promotion to give the wider public an opportunity to win thousands of cricket-themed prizes, including bats and balls, sports bundles, gift cards and tickets to The Hundred final through a series of promotions.

KP’s partnership with ‘The Hundred’ sees a selection of the company’s top brands featured across the team shirts of the eight men’s and women’s teams competing in the tournament, with brands including popchips, Butterkist, POM-BEAR, Tyrrells, KP Nuts, Hula Hoops, McCoy’s and Skips.