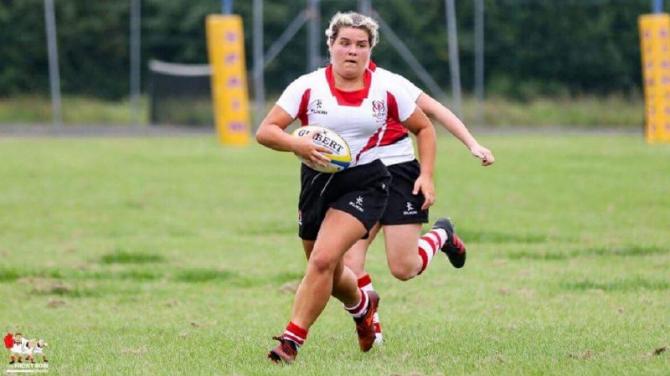 ULSTER Rugby U18 stalwart Emma Kearney has vowed to come back stronger after injury ruled her out of the remaining two games of the side's Irish tour.

The 17-year-old went off injured with a broken nose and concussion after a nasty clash of heads received in the final stages of Ulster U18 18-23 reverse against Connacht last week.

The setback has ruled the Cooke RFC loose-head prop out of Ulster's forthcoming games against Leinster and Munster, though Kearney has said that she will use the disappointment as motivation to spur her on in her ambitions to eventually represent Ulster at senior level.

Kearney, whilst obviously disappointed at not being involved, pragmatically sees the bigger picture and realises that there'll be other opportunities to come

“You have to accept it, there's nothing I can do about it, you just have to come back stronger,” said Kearney..

“I broke my nose and got concussed, so I'm not allowed to play the next two games.”

The loose-head prop was happy with her form going into the tour - she had just received a call-up to train with the Ulster seniors - and is determined to kick-on once she recuperates and convalesces.

“We were winning until the last ten minutes but we eventually lost 23-18. I'm out from playing for 23 days. I was really excited for it because I'd trained for months for it and then played really well against Connacht and got taken off in the last 10 minutes.

“I'm going onto the Ulster Senior team next year who I played with last year, so I know a few of them. I'm excited because I think that I'm ready for it now because this last year's got me prepared for it because we were training with the seniors so I think that that's got me ready for it.”

Speaking of the learning curve of training with Ulster seniors last year, Emma said: “I think working in a team gives you more confidence and it teaches you that no matter how rough the game gets that you go and shake their hand after it.

“I'm starting for Cooke Ladies so all the ladies that play for Cooke play for the Ulster Rugby team which definitely helps getting to know each other.”

Emma said that it was her dad and brothers' interest in rugby that initially saw her gravitate to the sport when she was a child. She said she was instantly smitten with it's physicality.

“It was always a game that my brothers and my daddy watched and they really enjoyed it, so I just thought, 'I wonder if I could do that?

“I had played Gaelic for a few months and didn't really like it that much.”

She believes that ladies rugby in Ireland is growing exponentially year-on-year and says that it is an exciting time to be a part of the game.

“As years have gone on women's rugby in Ireland has really grown, it's getting really, really big now. There's a lot of men and women trying to promote it more, so it's getting bigger every day.