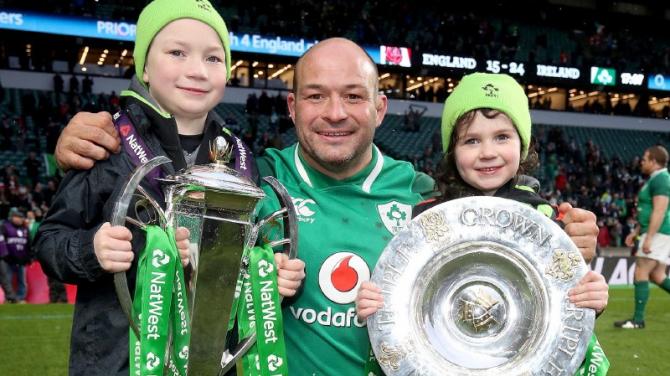 IRELAND rugby captain Rory Best knows that past success won’t guarantee anything as he leads his men in green into their Six Nations title defence in Dublin this weekend.

Last spring’s Grand Slam, only the third in Irish history, was followed by a summer Test series triumph in Australia and a famous first ever home win over the New Zealand All Blacks in November.

Joe Schmidt’s side go into the forthcoming campaign as favourites to retain their title but the defending champions face England at the Aviva Stadium on Saturday (4.45pm) and Poyntzpass man Best knows it will be a tough opener.

England are still smarting from being turned over at Twickenham last March as Ireland completed their clean sweep, and they will come to Dublin hungry for a revenge victory.

“Beating New Zealand doesn’t give us the right to beat England or indeed Scotland and Italy in the following games,” insisted inspirational skipper Rory at last Wednesday’s tournament launch in London.

“A lot of hard work has gone in while we’ve been at training camp in Portugal before we meet at (our) Carton House (base) to build up towards a massive Six Nations game and be ready to win it.

“That was the approach we did last year for the Six Nations, for the games in the summer and in November. It might sound boring but we’re under no illusions about how we must go about it. We have to make sure we win each small moment we can leading up to the game.”

After hosting England, Ireland go to Edinburgh to take on injury-hit Scotland at Murrayfield the following weekend with a trip to Rome to play tournament outsiders Italy at the end of the month.

Best’s team then has another weekend off before a tough finish to the campaign which sees France come to Dublin on March 10 before the final fixture against Wales in Cardiff six days later.

This is set to be Best’s last Six Nations campaign if, as expected, he retires from international rugby at the end of this autumn’s World Cup, while exceptional coach Schmidt is also standing down after that tournament.

Ireland are hoping key player Johnny Sexton will be fit for the England game but Best’s fellow Ulsterman Ian Henderson will miss the early stages of the tournament with a finger injury.

Rory has already enjoyed significant success in 2019 as Ulster captain, leading the northern province to the European Champions Cup quarter-finals with a home victory over French giants Racing 92 followed by an away win against Leicester Tigers.

Resurgent Ulster won five of their six group games to claim one of the competition’s best runners-up places and can now look forward to a quarter-final against champions Leinster at Dublin’s Aviva Stadium in April.

Earlier this month, Rory received a Special Recognition award, fittingly presented by fellow Ulster rugby great Willie John McBride, at the Belfast Telegraph Sports Awards at the Waterfront Hall on the back of his outstandingly successful 2018.