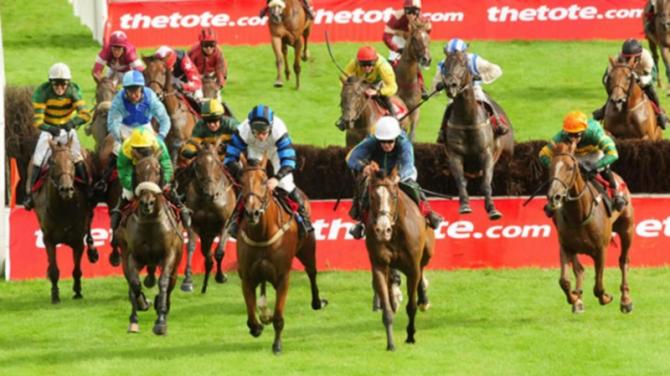 TEN years ago, this week the entire community of Newry were in jubilance as locally owned horse Ballyholland claimed success in the €250,000 William Hill Galway Plate.

Ballyholland raced in the Yellow and White silks of Cathal McGovern, a member of the Ballyholland Harps GAA club and was is trained in the townland of Raffrey, near Downpatrick by Colin McBratney.

Having won in much livelier conditions at Down Royal racecourse on his preceding outing, the then eight-year-old Ballyholland was sent off at 16-1 for the Galway Plate on ground that even his trainer Colin McBratney supposed would be too testing for him. Though his uncertainties proved unfounded early in the race as Ballyholland marched like the winner throughout the contest; settled in mid-division jockey on board Andrew McNamara always beheld to have everything under control and approaching the final obstacle McNamara asked Ballyholland to go and win his race and the son of Tiraaz breezed clear to win by an extraordinary margin of eight lengths.

“Cathal McGovern has had horses with me for a long time and he's never had much success, but he's stuck with me through the years and finally this lad came to reward him,” said McBratney.

“We came to Galway confident enough that he'd finish in the first three or four but for him to win so easily - I was flabbergasted to say the least but then again I've always thought he was a very nice horse, however in this game things hardly ever work out the way you planned.”

The bookmaking shops of Newry and further afield were bombarded with each-way bets from all angles on 29th July 2009. Familiar local bookmaker John Fearon spoke to us about the extent of the cash punted on the celebrated horse.

“Ballyholland was owned by a local man, and everybody was seemingly well informed of the likelihood of him running well above our betting expectations,” said Fearon.

“It wasn’t a good result for us bookies though things like this don’t occur every day so you must embrace it and take it on the chin.”

Astute McGovern acquired Ballyholland for a modest €2,000 and to ascend to the heights of winning that €250,000 race is almost farfetched.

And speaking after the surprising feat McGovern insisted: “Sure having any winner of any race is special but to win at the uppermost level of jump racing is a dream come true for a small-time owner like me and the buzz in my hometown at the time of the success made up for all the bad results down through the years – plenty of folk had a decent bet on my horse.”

When the celebrations had settled McGovern then confirmed the next move on their agenda was to try their luck at the Aintree Grand National, which is beheld upon being one of the toughest endurance challenges of thoroughbred racing nevertheless Ballyholland warranted to be given a chance in contending in this race after his heroics at the Galway races.

Ballyholland went off a well-supported 4/1 favourite but unfortunately when travelling merrily within himself, he had to be pulled up at the 15th fence owing to an injury, still even to this day several shrewd judges in the pubs in Newry have often assumed Ballyholland would have won the National if he didn’t come to grief. But then again Ballyholland’s well-being is paramount over success any day to his smitten connections.

Ballyholland has been there, done that, got the T-shirt and now he is relishing his well well-earned retirement at Moorhil stables, which is of course situated in Ballyholland. Cathal McGovern’s faith in this one-in-a-million thoroughbred was duly rewarded.

The Galway Races celebrates 150 years as Ireland’s and one of Europe’s largest racing festivals this week, with bumper crowds expected for the seven-day celebrations of duel-purpose meeting.

Around €100million is estimated to be gambled with 52 races over the seven days and a record prize fund of €300,000 for the feature race; the Galway Plate.

We have picked out six horses that they feel are worth keeping on your side throughout the fascinating festival if you want to stay in profit.

One Cool Poet: This Son of Urban poet has been knocking loudly on the door of winning in equivalent handicaps to suggest if he is in the same vein of form, he really should be a principle player. Recent second placed effort he was a shade unfortunate, only getting nabbed on the line when on the gasp of triumph. Rates a big danger to all if he gets a run for trainer Matthew Smith.

Saltonstall: This Aidan McGuinness trained horse is a high-class animal, who has yet to show his true colours for the Lusk based stables nevertheless has got himself down to a very attractive handicap mark and if his recent fourth placed effort at the Curragh is anything to go by he really should be up to making his presence felt in this premier handicap. He is unquestionably due a big win.

Snugsbourgh Benny: Trainer Liam Cussack is a shrewd handler and he will have this talented nine-year-old in the best possible shape for this festival.

This horse was well fancied for last year’s Irish grand national however he had to settle for fourth laced as he was held up to far back and was impotent to make up the lost ground. His most recent run was a shade disappointing though I am at the mindset it was more a pipe-opener for this race.

Neverushacon: One of the better bets of the complete week. This Jessica Harrington trained horse has been in great form over both the flat and jumps jurisdictions and recently came back of a short break to win a charity race easily.

The manner which the horse breezed into the lead when barely asked any question by the inexperienced jockey was quite remarkably. With a more experienced rider on board I think he is one of the best banker bets of the festival.

Sole Pretender: Locally based trainer Norman Lee has been ranting and raving about his horse for a long time and only recently has this son of Dansilli most recently he has really come to age on racetrack with an imposing run of form winning three on the bounce.

He has looked like a stand-out contender for this race for a very long time and the current betting odds of 10/1 look rather substantial. Jockey Johnny Burke has been booked to ride this horse and his presence is another positive.

Ivaquestion: This Sheila Laverty trained horse has been exciting everyone in the yard since his debut run a few weeks ago. He finished that race of with a real flourish to eventually end up fourth place. That was his introduction outing and the vibes are positive about him improving further and a big run is very much expected on Friday evening if he gets a run.

THE INSIDE TRACK AT GALWAY RACES

The four important things to consider before you part with your hard-earned cash at this year’s Galway festival. The bookies love novice punters.

The ground at Galway racecourse can be very unsettled and keeping a firm eye on the weather forecast is vital to making the best punting choices at Ballybrit.

At each of the last two festivals the ground on the Flat course has gone from yielding at one point, to soft, soft-to-heavy in places. Similarly, the jumps track at one point has been designated as good before changing to soft in the space of two or three days. Watch the weather forecast to make your form studying as effective as possible.

The market is worth following

The gambles come hand-in-hand at this festival. It's conclusively worth your while keeping an eye on the market movers throughout the day on whatever punting platform you're using. Amongst last year's late movers in the ring who rewarded their supporters were Storm Rising (10-1 from 16), Premier League (5-1 from 8), St Gallen (12-1 from 25), Great Trango (12-1 from 20), Triplicate (7-2 from 11-2) and Castlehume (10-1 from 14). The market is often your best acquaintance at the Galway festival.

Previous experience at Galway racecourse is colossal positive point and that was again exhibited at last year's festival. Of the 55 races run at last year's week-long festival 22 races went to horses who had previously run at this unique track. Don't underestimate the advantage of having experience up the notorious Galway hill.

Trainers are often labelled as creatures of habit and at Galway it pays to be conscious of races which stables have strong records in.

An apparent example would be the Irish EBF Maiden on the second last day of the festival, Saturday (August 3). Aidan O'Brien has won this race for the last four years with high-class performers such as Broome and Capri.

The Ballydoyle trainer's runners in that race have been well found in the market, but there is still value in following Ger Lyons in the mile three-year-old handicap on the Wednesday, having won three of the last four runnings.