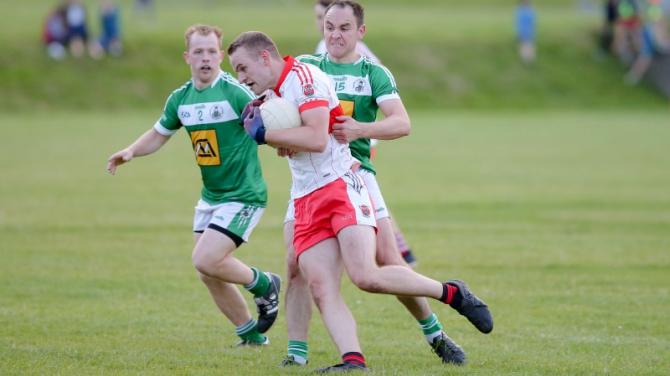 Played at in front of a big crowd at Cruppen, the St Killian’s men should have been out of sight after storming into a seven point lead with only six minutes gone, but the Camlough men clawed their way back and were unlucky not to win the game.

As expected it was physical clash with Whitecross coming off worse, as talisman Cathal McSherry was forced to leave the field with a dislodged shoulder, which looks to have ruled him out for the rest of the group games and they were also down to 14 men on 16 minutes when Connor Malone reacted to being fouled and picked up a red card.

By that stage Whitecross were 3-02 to 0-05 five up. Cathal McSherry opened St Killian’s account with only 14 seconds gone and a minute later Carrickcruppen’s Conor Sloan had a chance of goal but keeper Caolan McParland pulled off a cracking save to concede a 45’.

Armagh keeper Blaine Hughes was between the posts for his club and his converted 45’ got the Camlough men off the mark.

Cathal added his second point and then a goal after his brother Neil provided the pass. With six minutes gone Niall Boyle made a surging 40-metre run, before off-loading to the youngest McSherry brother and Ryan clinically shot into the net.

Whitecross’ sails were up and Cruppen looked in disarray but a quick burst of points from Conor Sloan, Cathal O’Grady and free-taker Eion Woods steadied the ship.

Still St Killian’s proved dangerous on the counter, Cruppen could do nothing to stop county man Mark Shields’ runs and as he blistered towards goal he teed-up Ryan McSherry who drilled in his second goal to give Whitecross a 3-02 to 0-05 lead with 13 minutes gone.

However, in the remaining 50 minutes played, including additional play, Carrickcruppen outscored their opponents 1-08 to five points.

Granted St Killian’s played the rest of the game with 14 men and it changed the game completely, but five further points is a poor return.

Carrickcruppen dug deep and battled hard as John McCullough was a colossus in the middle and pressing in attack. Daniel Lewis put in a tough shift while Woods was cool from the dead-ball.

Ten of Carrickcruppen’s 14 scores came from frees or 45’ while three of Whitecross’ kicked 3-04 from play.

Woods kept the Cruppen scoreboard ticking over and Adam Matthews came close to bagging a goal but his shot rattled both posts and somehow stayed out.

The Camlough men grew in confidence and their tally hit double digits before the break but two points from Ryan and Cathal McSherry kept Whitecross’ noses in front at the break.

Like the first half Whitecross started well with Aidan Finnegan knocking over a point straight from the throw-in, but that bright restart quickly dimmed as Carrickcruppen assumed control.

Their numerical advantage was boosted by Whitecross' failure to at any time press Carrickcruppen’s kick-outs and as a result Blaine was happy to kick short, play a neat-one-two and be almost on the 45’ before starting Carrickcruppen’s attacks.

Cathal McSherry has been outstanding at full-forward this season but he was deployed in the middle in what was a messy battle between 16 players.

The hits went in hard and there were short bursts of handbags and no-one was getting anywhere easy. The second half was very stop-start as injuries needed treated and as the sunlight faded the wind also picked up.

Neil McSherry drilled over a wonderful point but Woods quickly replied and with 43 minutes played Carrickcruppen took the lead for the first time when Democrat's Advertising Executive Daniel Lewis palmed into the net at the back-post, for a well-worked goal.

Yet bizarrely that was Carrickcruppen’s last score. They almost added another goal but Woods’ strike hit the side-netting.

Whitecross were living off scraps and with Cathal McSherry going off injured they were missing an obvious target man. Colm O'Hanlon was a lone striker but surrounding with Cruppen men. Mark Shields tried spark something but he couldn’t force the issue and so it was left to Neil McSherry to carry the attack. And with 60 minutes played Neil McSherry steered over a 40-metre free to deliver the equaliser.

Both sides pushed for a winner but a draw was probably a fair result. Questions will be asked as to why a Wolfe Tone referee was appointed to ref the game when the Tones are in the same Championship group as Cruppen and St Killian’s. And that is no reflection on the referee’s performance.

Cruppen were without the injured Paddy McCullough and will take great confidence with the manner of the comeback. Lesser teams would have wilted. And they’ll face Keady with renewed expectations.

All but one Whitecross point came from the McSherry brothers and Whitecross now face the Tone without the injured Cathal McSherry and suspended Connor Malone, pending an appeal, and this changes the dynamics of their team greatly.

But while they’ll not be overly confident, they should feel that if they can improve individually and collectively then they should be able to get a result.