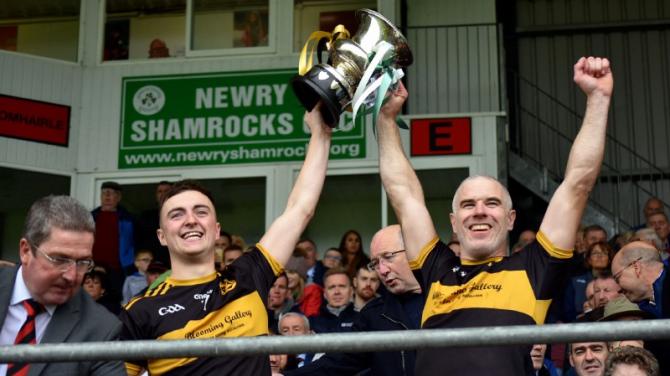 GLENN manager Tony Bagnall has hailed the character and commitment of his two captains Stevie Clarke and Conor Cranny ahead of Sunday's Down Intermediate Club Championship Final against Shamrocks.

He says he will be taking Sunday's game as City derby and he expects a huge challenge from Martin Rafferty's Shamrocks.

Considering Glenn lost so many top players including Down captain Niall McParland, Down duo Shay and Ronan Millar as well as seasoned players such as Dennis and Niall Murtagh, many felt that a final berth might have been out of reach.

But the Glenn boss is delighted with how the young players have seized their chance on the senior team.

We lost a lot of our key men and if we had them we were targeting an Intermediate Championship but without them it is a bit of an achievement to get this far.

A lot of the young lads have stepped up and in fairness if some of those senior men were there they may not have got their chance either.

There is something that these lads have grown up together and fighting for each other and they have done that build that togetherness themselves and brought it through to senior level.

Players such as Jarlath McConaghy, Dylan Bagnall and Jack McCartan have been tremendous this season while Mattie Bagnall and Patrick Brooks have linked up well in this Championship campaign.

Confidence his high, especially following Friday's win over Bredagh, which seen them avoid the drop but Bagnall doesn't buy into their favourites tag.

“It's a derby, I know we are a wee bit outside Newry but it will be treated as a derby,” said Bagnall.

“It is great for the area and while I see Shane O'Neill's were unlucky in their final in Armagh, there are three clubs in two Intermediate Finals within ten miles of each other so it shows we are doing something right.

“All our players need to step up on Sunday because Shamrocks will be serious opposition.

“Shamrocks are flying the flag for the City and fair play to them. They have really stepped up in the Championship and every time I see them I wonder why they are playing Division Three football.

We are a league above Shamrocks but I have seen them three or four times this season and no way are we taking them lightly, that is for the bookies and the fans to talk about favourites. It is Championship Final and whoever performs will win it.”

Both captains Stevie Clarke and Conor Cranny missed the start of the season through serious injuries and it is incredible that they have got back to full fitness to lead their team into Pairc Esler on Finals Day.

“Stevie done the cruciate and decided to retire and then decided to give it another go and basically done it again and now he is playing with his cruciate again,” said Bagnall.

“I cannot speak highly enough of what he has done to get back to full fitness.

“Conor Cranny suffered a serious knee injury about three weeks before the league started and it looked as if his season was over but he worked hard to get back around July and he is getting back to his best now. So what those guys have gone through has inspired the team.

Bagnall knows what it takes to win Championships because he was captain the last time Glenn won the Championship in 1991. Tony's dad, the late Gerry Bagnall, was manager then and now Tony has two sons on the panel, Mattie and Gerard.

“It would be massive for me, so it would be a nice repeat of history,” said Tony.

“It is 28-years ago and to win an Intermediate would be something special.”

The Intermediate Final throws in on Sunday (October 13) at 2pm in Pairc Esler.