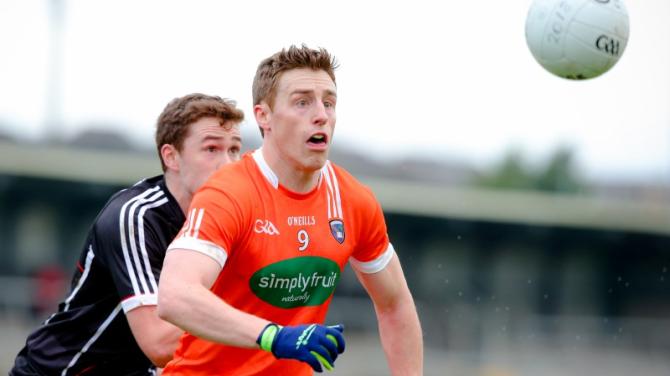 ARMAGH'S talisman Charlie Vernon has announced his retirement from the inter-county scene after 14 years with the men in orange.

Vernon was a player identified early in his playing days as the player to succeed now manager Kieran McGeeney and the Armagh Harps man has probably played every position with the exception of goals under many managers.

Vernon recalls the great occasions where he won U21 Championships, Senior Ulster titles, National Leagues as well as representing Ulster in the Inter-provincial series.

A fans favourite and a player who took time after games and off the field to engage with supporters will be fondly be remembered while his robust playing style and his experience playing at the top level won't be easily replaced.

His statement, issued through the County Board reads: 'Today I announce my retirement from inter-county football. From underage to minor and then my transition into the senior team in 2005, it has been a great honour and privilege to play for Armagh over the past 14 years. I have been fortunate to have played with and against, some of the greatest players to have played our game and have met some extraordinary people along the way.

My involvement with Armagh has allowed me to enjoy many successes both on and off the field. The two Ulster Senior Championship victories in ‘06 and ‘08, three National League titles, Ulster U21 Championship in ‘07 and the Inter-provincial Railway Cup victory with Ulster in 2016 are memories that I will always cherish.

I would also like to sincerely thank my club Armagh Harps for all their loyalty and support throughout my time with Armagh. It has been a great privilege to represent the club at county level for so many years. I look forward to continue playing with them in the coming years and hope we can emulate our success of 2017.

To the Armagh supporters, a massive thank you for all the support over the years through all the highs and lows. The passion and dedication of the Armagh support has always been an inspiration to every squad I have been involved with. I have memories that I will always treasure and I look forward to joining you in the stands and terraces to support the Armagh team.

To my family, in particular to my wife Joanne, my mother Catherine and my late father Charlie. I will be forever grateful for everything you have done for me. I will always appreciate your love and support and the sacrifices you made to allow me to play for Armagh at the highest level.

Finally, I would like to take this opportunity to thank all players, medical staff and management teams, past and present, who I was involved with in my time with Armagh. Your continuous efforts to improve me as a player were always appreciated. I end my career in the knowledge that I have given it my all to drive Armagh football forward and I hope that the team continues to make strides towards success at the provincial and national stage once more. Go raibh maith agaibh uilig agus adh mór. Charlie Vernon.'

A statement from Coiste Ard Mhacha said: We extend our thanks to Charlie for his 14 years of outstanding service. Charlie led by example on and off the pitch and was hugely respected and regarded by his fellow players and management teams.

We thank him for his loyalty, commitment and dedication he has given to Armagh football and beyond, and we wish Charlie and his family all the very best in the coming years.'